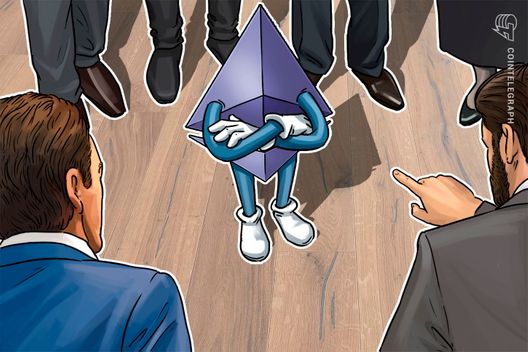 The Wall Street Journal reports that federal regulators are scrutinizing Ethereum to determine whether or not it should be retroactively classified as a security.

Ethereum (ETH), the world’s second largest cryptocurrency, is coming under particular scrutiny from U.S. federal regulators, the Wall Street Journal (WSJ) reports today, May 1. According to the WSJ, regulators are debating whether or not to classify it as a security under U.S. law.

The WSJ cites source familiar with the matter, who report that regulators have declared that ETH, the world’s largest altcoin, is in a regulatory “gray zone”. A major concern reportedly being raised is how ETH was first distributed – in a sale of ETH starting in July 2014, the Ethereum Foundation raised over 31,000 BTC, (around $18.3 mln at the time) in one of the world’s first Initial Coin Offerings (ICOs).

Because the funds were used to develop the Ethereum platform, the WSJ’s said regulators are concerned that the sale of ETH was arguably a securities sale, especially given that many investors likely bought the coins speculating that the it would eventually rise in value.

If ETH is deemed a security, then under U.S. federal law it should have been registered as such with the U.S. Securities and Exchange Commission (SEC) back in 2014 before being sold to US investors, as the WSJ notes.

Regulators are reportedly also studying whether or not the Ethereum Foundation continues to wield influence over the coin’s value.

Former U.S. government regulator Gary Gensler told the WSJ that “there is no legal precedent” for ETH. In a speech last week, Gensler said that “there is a strong case” ETH could be a “noncompliant” security – meaning unregistered with the SEC. As Cointelegraph reported, however, Gensler noted that ETH may be able to avoid a securities classification, since the coins are now mined.

The Ethereum Foundation responded to Gensler’s claims last week, saying that it does not control the supply or demand of ETH and owns less than 1% of the amount in circulation.

According to the WSJ, a regulatory body that will include senior SEC and CFTC officials is scheduled to discuss possible measures on May 7.

ETH is currently trading at an average of $663 per coin, down almost 2 percent over the past 24 hours.