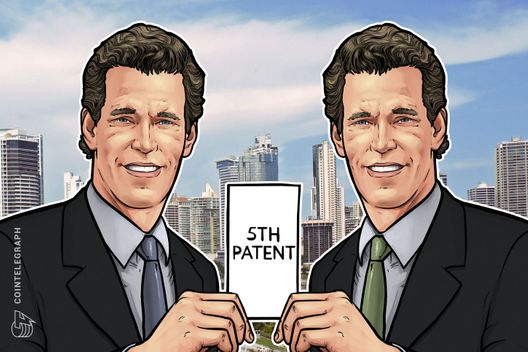 The US has awarded Cameron and Tyler Winklevoss their fifth patent this year, which refers to crypto-based exchange-traded products (ETPs).

Cameron and Tyler Winklevoss’ Winklevoss IP has won a patent application allowing it to settle exchange-traded products (ETPs) using cryptocurrencies, the US Patent and Trademark Office (USPTO) revealed Tuesday, May 8.

The move marks another victory for Winklevoss IP this year, after the company also gained a patent tied to cryptocurrency security in February as part of its Gemini trading platform plans.

The description of the mechanism governed by the patent reads:

A year ago, the US Securities and Exchange Commission (SEC) rejected the Winklevoss’ application to launch a regulated Bitcoin exchange-traded fund (ETF), one of the instruments which falls under the bracket of ETPs.

The rejection caused uncertainty in markets at the time, while many sources suggested the application had come too soon and that authorities were yet to put measures in place to handle such innovation.

The founders have appeared not to give up on the idea, Wall Street since witnessing steps from finance giants such as Goldman Sachs and the New York Stock Exchange to launch Bitcoin-related products and services.

Winklevoss IP has amassed a total of five successful patents this year, according to data from Justia Patents.