Why JP Morgan’s Blockchain Patent Application Is Not That Surprising

Why JP Morgan’s Blockchain Patent Application Is Not That Surprising JP Morgan’s filing for a patent based on DLT does not mean they are now Bitcoin supporters.

JP Morgan once again caused a bit of an upheaval within cryptocurrency circles last week - this time with the publication of their peer-to-peer (P2P) payments network patent application based on distributed ledger technology, like blockchain.

Some crypto enthusiasts branded the move as “hypocrisy to the extreme.” The criticism is not unfounded but perhaps not accurate. The bank, and to a greater extent, their outspoken CEO, Jamie Dimon, has been responsible for a lot of fear, uncertainty and doubt surrounding Bitcoin and cryptocurrencies as a whole.

“Bitcoin is a fraud”

The Jamie Dimon/JP Morgan saga of 2017 is still fresh in the minds of crypto enthusiasts. It all started with Dimon’s now-infamous words calling Bitcoin a “fraud” in September 2017. Shortly after that, in a somewhat confusing move, JP Morgan purchased a chunk of Bitcoin.

Even more confusing was the fact that less than a week later, Jamie Dimon lashed out against Bitcoin, stating that governments would soon ban it. In the same breath, he fired shots at the industry as a whole, saying cryptocurrencies are “worth nothing”. Less than a month later he called Bitcoin investors “stupid”, adding that they “will pay the price for it one day”.

However, JP Morgan’s strategies didn’t always seem to line up with the opinions of their CEO, as in Nov. 2017 the bank announced that they planned to trade Bitcoin futures on the Chicago Mercantile Exchange (CME). In December 2017, a strategist at the bank had gone so far as to say that regulated futures markets give Bitcoin legitimacy.

By January 2018, Jamie Dimon himself had done a complete 180 on his “Bitcoin-is-a-fraud” comments and said he regretted making it. All this happened within the space of four months and cemented JP Morgan’s perceived reputation - and Dimon’s personal reputation - as the ultimate Bitcoin and cryptocurrency “villain”.

Criticism was never labeled against blockchain

While their skepticism surrounding Bitcoin and cryptocurrencies is clear, JP Morgan, and Jamie Dimon, never expressed any animosity towards blockchain’s legitimacy. In fact, JP Morgan is one of the underlying technology’s earliest supporters and testers.

As far back as 1999, the bank filed a patent for an alternative payments network. In 2016 they unveiled Juno and Quorum, two separate blockchain-based projects. JP Morgan is also one of over 300 members that make up the Enterprise Ethereum Alliance (EEA).

The bank has a strong record of support for blockchain itself and their latest patent application should come as no surprise. In fact, the bank first filed the patent - which aims to facilitate interbank payments using blockchain technology on October 30, 2017, a mere two weeks after Jamie Dimon labeled Bitcoin investors stupid.

The apparent surprise or hypocrisy stems from the fact that Bitcoin, blockchain and cryptocurrency are still being used as interchangeable concepts in mainstream media. This is not accurate, just as JP Morgan’s filing for a patent based on distributed ledger technology does not mean they are now staunch Bitcoin supporters.

However, the surprise might come later. Blockchain has moved on from just being the technology that underpins Bitcoin and has potential use cases other than just as a basis for cryptocurrency networks, including the tracking of vaccines in healthcare, secure remote voting during elections, incorruptible and accurate record keeping of official government documents, to name a few.

Saying that, JP Morgan is specifically applying for a patent on a “method for processing network payments using a distributed ledger”. This begs the question; can you have a P2P payments network based on blockchain without utilizing a digital token in some shape or form to process such payments?

Some community members don’t believe that you can, even arguing that the bank would be in direct competition with Ripple’s cross-border transfer platform:

“It's not the competition part that is off... it's the fact that they are describing the exact thing Ripple is currently pushing into the market. There is no way this patent goes through, and if it does, prior art will protect Ripple as they have this working already. It's (as someone else stated) like filing a patent for an electric vehicle today.”

How does Ripple work?

Ripple connects banks around the world and enables them to offer real-time cross-border payment services to customers. Cross-border payments in the traditional sense require a number of intermediary companies to execute which means transactions can take up to four days to complete.

Ripple allows banks to sidestep these intermediaries with their transaction protocol, enabling them to execute transactions directly, and in doing so, cutting down costs and processing times. The transaction protocol includes a five-step process of payment initiation, pre-transaction validation, cryptographic hold of funds, settlement and confirmation. 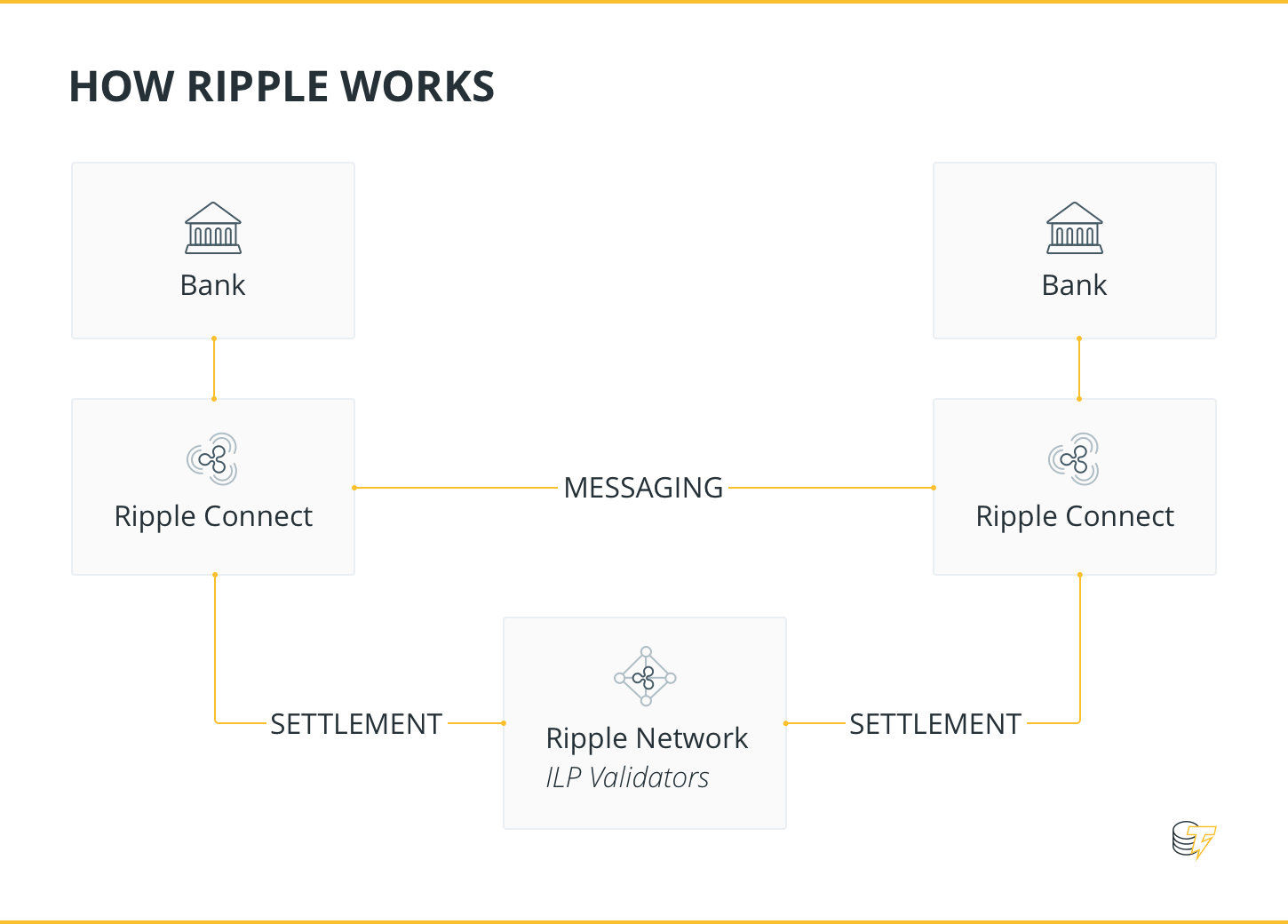 Messaging systems are used to coordinate information exchange between the originating and beneficiary banks and an interledger protocol (ILP) ledger is used to coordinate the actual movement of funds. The goal is to speed up processing times, increase end-to-end visibility, increase transaction approval rates and ultimately lower transaction costs.

What are the similarities with JP Morgan’s proposed blockchain payment network?

The patent application describes a process of “Systems and methods for the application of distributed ledgers for network payments as financial exchange settlement and reconciliation.”

It goes on to claim, “In one embodiment, a method for processing network payments using a distributed ledger may include: 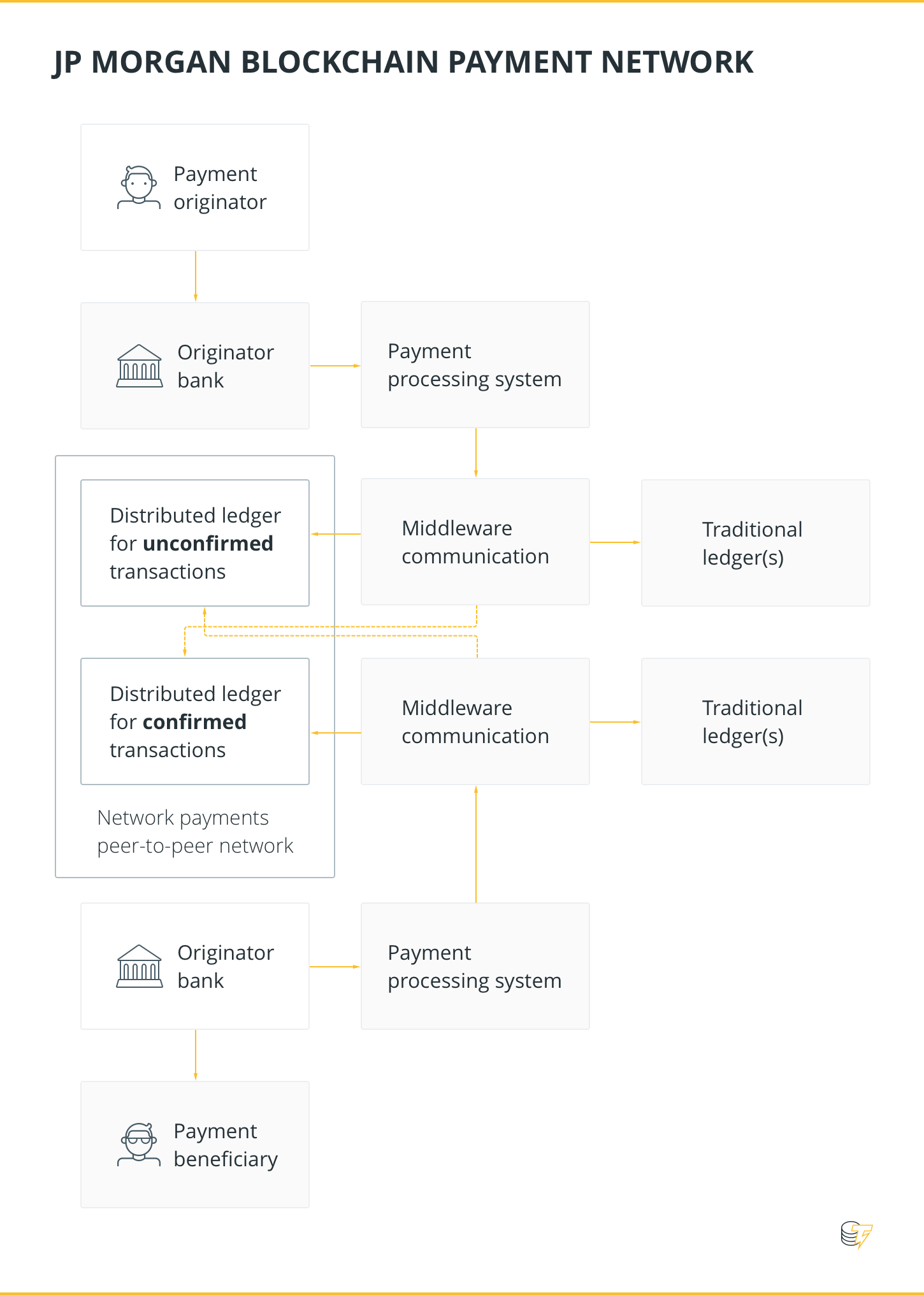 In essence, this is a very similar system and process to that used by Ripple, basically describing an interbank messaging and reconciliation protocol based on distributed ledger technology in order to eliminate expensive intermediaries, speed up transaction time and extend the global remittance reach.

It would also seem then, that if JP Morgan is indeed planning to develop the system described in the patent, they will have to implement it with a cryptocurrency at its core, the very thing they have been trying to discredit for the last few months.

The ultimate question then becomes whether it is possible to be a strong supporter of blockchain on one hand, but an equally strong opponent of the validity and legitimacy of cryptocurrencies on the other.