This Bitcoin Whale Sold at $12,000 BTC Price After HODLing for 2 Years

This Bitcoin Whale Sold at $12,000 BTC Price After HODLing for 2 Years 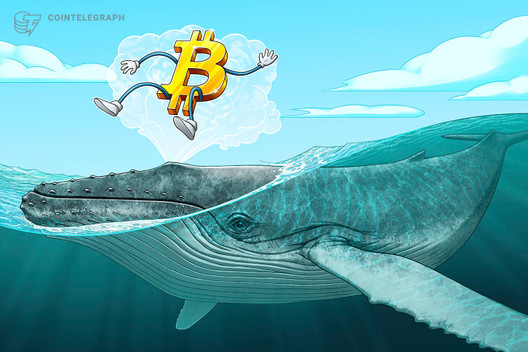 A Bitcoin whale, who accumulated 9,000 BTC in late 2018, has sold after 22 months and two capitulation phases.

A Bitcoin (BTC) whale — an individual investor who holds a large amount of BTC — took profit after two years. Data from Whalemap suggests the whale purchased nearly 9,000 BTC in the third quarter of 2018.

A pseudonymous trader known as “Byzantine General,” who shared the data, said:

“This whale is a legend. See that big bubble around 6k in 2018? That's almost 9k BTC that was accumulated there. He finally took profit, after 2 years and 2 major capitulation events.”

The whale held on to the BTC for nearly 22 months, through two major capitulation phases. Bitcoin dropped to sub-$4,000 level twice, first in January 2019 and second in March 2020. The investor waited through both periods, ultimately selling at around $12,000.

What does a Bitcoin whale taking profit suggest?

On Aug. 16, Cointelegraph reported that large whale clusters are present in the $12,000 to $14,000 range. At the $12,000 level, many whales are either in profit or at breakeven, which arguably could give whales an incentive to sell.

Whether it shows whales are cautious that Bitcoin has hit a local peak remains unclear. Whales, due to the sheer size of their holdings, follow liquidity. If they feel that there is sufficient liquidity to sell, possibly as a result of rising retail activity, then they are likely to sell.

Hence, a whale’s sell-off does not necessarily show that Bitcoin has peaked. One could argue that it raises the chances of consolidation in the short term. But until BTC drops below key support levels, it is premature to suggest a local top has formed. Also, it is difficult to estimate how much of the 9,000 BTC the whale sold.

A reason some whales appear to be taking profit at current levels might be Bitcoin’s relatively high spot volume. According to another pseudonymous trader known as Bitcoin Jack, the market remains “awkwardly” driven by the spot market. He said:

When the market is heavily driven by the derivatives market, whales have less liquidity to seek, and minor pullbacks could cause large price movements.

What traders expect in the near term

In the short term, traders remain mixed on the sentiment around Bitcoin. Michael van de Poppe, a full-time trader at the Amsterdam Stock Exchange and Cointelegraph Markets analyst, says BTC could drop to as low as $10,000 if it loses $11,450. He said:

Following a nearly three-fold increase in price, a consolidation phase in the near term could strengthen the momentum Bitcoin in the longer term.