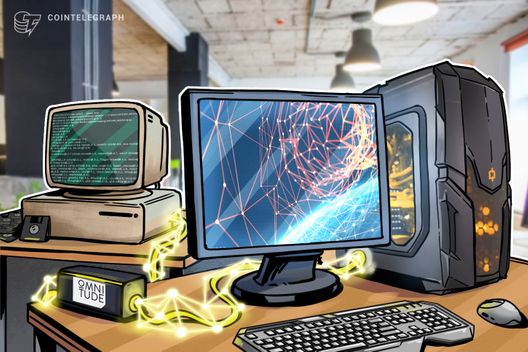 A UK startup is developing so-called middleware that could help traditional IT systems ‘talk’ to Blockchain-based systems, helping a large swathe of businesses utilize the distributed ledger and related technologies.

A UK startup is building so-called middleware that could allow many traditional enterprise IT systems such as ERP, WMS and CMS to quickly adopt Blockchain-based systems.

Most enterprise systems cannot be swiftly integrated with Blockchain, and many businesses cannot afford to invest millions of dollars in new ones. Omnitude aims to fill this critical technology gap. The company says its technology will deliver plug-and-play ease, helping businesses quickly and cost-effectively embrace Blockchain ledger technology, and benefit from enhanced transparency and other features.

“Omnitude is a radical concept in Blockchain. The vision for Omnitude is much bigger than one single application,” Chris Painter, the founder and CEO of Omnitude, said in a press release.

E-commerce platforms and retail have emerged as the low hanging fruits for Omnitude’s middleware, notably because of its ability to fight fraud and ease payments.

Both e-commerce and retail faces rampant counterfeiting and violation of intellectual property rights. According to the European Commission, counterfeiting was valued at about 672 mln euro in 2016. Omnitude’s Blockchain technology could help by providing a record of manufacture origin and provenance, helping fight counterfeiting.

Similarly, card not present fraud was estimated by Euromonitor International and UK Cards Association at 1.8 bln euros in 2016, much of it happening on ecommerce sites. Omnitude says its single identity system will help reduce the most usual form of fraud.

On the payments front, Omnitude promises to cut payment gateway costs, which are typically around 2.9 percent, and also make it easier to exchange cryptocurrencies into fiat currency and vice versa.

Omnitude’s middleware is built on the Hyperledger Fabric, a broad open source industry standard for Blockchain and other distributed ledgers.

“It is the general open source ethos of the Hyperledger project that is perhaps its greatest advantage,” Painter wrote on the digital news website V3. “As the internet of things (IoT) has recently found out to its cost, setting up a multitude of different protocols can cause huge interoperability headaches later on when everything finally gets connected.”

Hyperledger, created in 2015 by the Linux Foundation, advances cross-industry collaboration of the Blockchain and other distributed ledgers. It has broad industry participation and consensus, enhancing the creation of a universal standard underpinning digital transformation of the world's largest businesses.

Getting up to speed

“The next gen of Blockchain tech is coming in now; 2018 will be the year that blockchain gets mass uptake,” he added.

Omnitude is also working on making transactions from crypto to fiat and vice versa easier. Painter calls this exchange “one of the biggest pain points” at the moment.

“That’s why we’re looking to deliver exchange functionality. Just imagine, through every e-commerce site that runs the Omnitude middleware layer there is a live ledger of customers who wish to move their cryptocurrency into fiat or their fiat into cryptocurrency. That transaction can take place through matching both ledgers simultaneously. The result would be an instant exchange,” Painter said.

“As a customer, I will be able to put my body measurements onto the system, and then every fashion retailer also in the system will be able to supply the correct size,” Painter told Drapers Online. This, he said, would cut down on returns because of sizing problems.

The proof of concept with Swisscom went live at the end of March. Its key features include a single sign-on online profile that can be used across Omnitude-based ecommerce sites and a stock dataflow system that tracks real-time stock levels and automates replenishment using a live smart contract.

Omnitude has previously raised $4.2 mln (£3 mln) and has an ongoing initial coin offering (ICO) scheduled to end on April 25. Its ECOM tokens are valued at USD 0.46 apiece. The offering has a hard cap of $23 mln, or 50 mln ECOM.