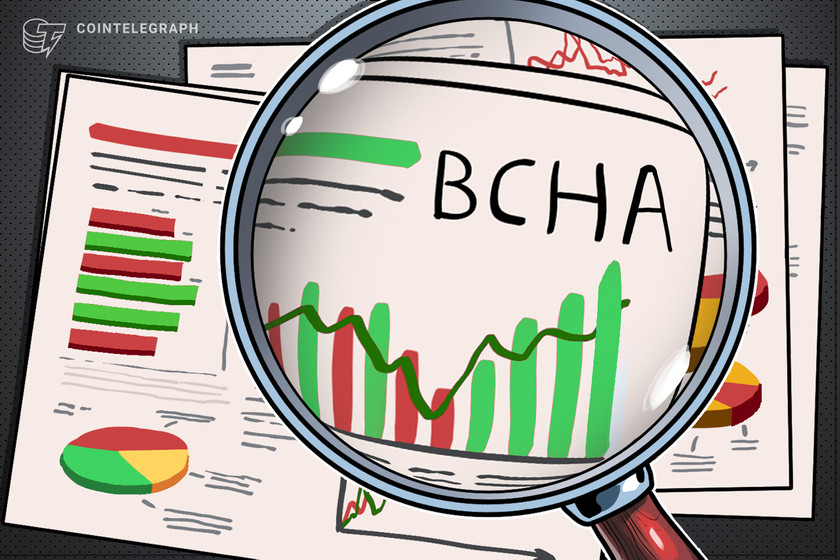 After being steamrolled in Bitcoin Cash’s most recent hash war, Bitcoin ABC shows signs of life with a new client release and a 70% rebound in price off a low base.

Amaury Sechet's Bitcoin ABC coin is up 70% today as the developer announced a new upgrade for the client software that includes stability-related fixes for both forks of the Bitcoin Cash client.

The new release breathes much-needed life into the Bitcoin ABC (BCHA) faction of Bitcoin Cash which was crushed by rival Bitcoin Cash Node (BCHN) in a briefly-lived hash war following the fork on November 15. This led to rumors about its impending demise.

According to CoinMarketCap, BCHA opened trading at $11.78. The coin is now trading with substantial volume on exchanges and has been as low as $10.50 and as high as $21 before settling back down in the $19-$20 range.

This represents a 70% increase over the last 24 hours and a boost in confidence that the coin will not be abandoned. However the BCHN version currently trades at $254.61, and is now listed as Bitcoin Cash or BCH on most exchanges.

Sechet also signaled positivity for the future of his creation on Twitter overnight, inferring that he would remain dedicated to the ABC community.

The BCHA crowd is the most amazing crowd in crypto, hands down.

The fact that it is small, yet, says way more about crypto than it says about anything else.

There is no other place I'd rather be in.

Losing its claim to the Bitcoin Cash name and BCH ticker, BCHA faces heavy crosswinds as a new coin in terms of gaining merchant and exchange support. In addition to these problems, only a handful of blocks have been added to the BCHA chain by miners since Nov 15, the date of the fork. The slowdown is the result of a lingering imbalance between an overly-high mining difficulty and a lack of hash power necessary to find blocks at said difficulty.

The most recent BCHA block, which took seven hours to find, contained over 14,000 transactions — a substantial uptick from the previous blocks’ count of 1,674. It also contained slightly over 0.9 BCHA in transaction fees, which is $19.40 at today’s prices. Per the new coinbase rules implemented by Bitcoin ABC, 8% of the newly-mined coins along with 8% of transaction fees went to the protocol development fund, which is a total of 0.57 BCHA, or $12.41. Although BCHA blocks are still not being found at a normal rate, this problem is expected to subside with BCHA’s next difficulty adjustment.

Unlike the political and personal drama that unfolded during the last Bitcoin Cash hard fork in 2018, BCHA’s “benevolent dictator” Sechet has been amicable in terms of acknowledging the will of the community and the likelihood of ABC’s defeat. On Nov 12, three days before the expected fork, Bitcoin ABC initiated the transfer of the bitcoincash.org domain to parties loyal to the majority Bitcoin Cash Node (BCHN) client implementation, in anticipation of not emerging victorious from the impending hash war.

Bitcoin ABC has also said that it will continue to support both BCHA and BCHN implementations of the Bitcoin Cash client after the fork in order to serve businesses who have adopted the coin as a method of payment.

Bitcoin ABC will support both BCHA and BCHN after the #BCH chain split.

Businesses have the freedom to choose between the two chains, while still being able to run battle-tested Bitcoin ABC software.https://t.co/57dlgKcpvz pic.twitter.com/zjsoe8TJE2

Bitcoin Cash has faced an uphill battle raising funds for development. In August 2020, Bitcoin ABC launched 0.22.0 of their client, introducing the coinbase changes as an attempt to help ensure the continual availability of funds for developers of the protocol. The proposal has been mired in controversy from its introduction, with the development fund being regularly likened to a tax and shifting in proposed size from 15% to 5% to its current 8% over the course of the year.