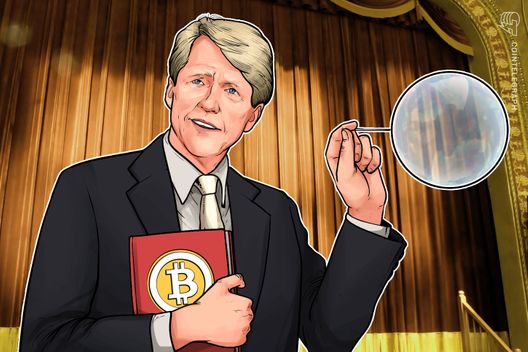 Robert Shiller, Nobel Prize winning economist, is relatively positive about Bitcoin’s future, even as a “bubble.”

Nobel Prize laureate for economics Robert Shiller believes that while Bitcoin (BTC) might be a bubble, that doesn’t mean that it will burst and be gone forever, according to an interview on April 13 with CNBC’s Trading Nation.

Shiller, who is currently a professor of economics at Yale University, referred to BTC as “another example of faddish human behavior. It’s glamorous”:

"I'm interested in [B]itcoin as a sort of bubble. It doesn't mean that it will disappear, that it'll burst forever. It may be with us for a while."

Shiller highlights that he knows that “smart people” have invested in cryptocurrencies, including many of his students, but adds that the attraction to crypto is “a story that I think goes way beyond the merit of the idea. It is more psychological than something that could be explained by the computer science department."

According to Shiller, there is a “part” of the cryptocurrency “fad” or “bubble” that is political, as people that don’t trust their governments may be tempted to invest.

In September of last year, Shiller went on CNBC’s Fast Money with Brian Kelly to speak along the same lines about crypto, saying that “it’s the quality of the story that’s attracting all this interest.”

On Friday, April 13 Brian Kelly said in an interview that he supports investor Tim Draper’s prediction that Bitcoin’s price could hit $250,000 by 2022.