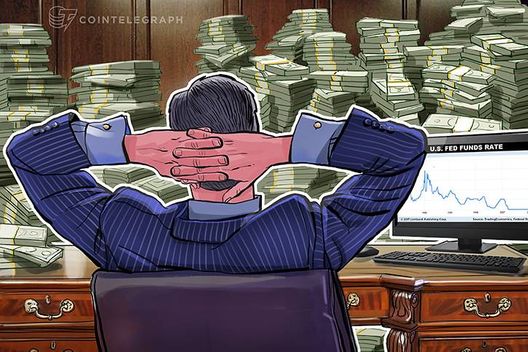 More Americans may move away from traditional finance and into crypto if the the U.S. Federal Reserve (Fed) relaxes post-2008 financial regulations, according to a study published by Weiss Ratings May 22.

The Fed is set to meet on May 30 to consider watering down the “Volcker Rule,” in what would be a major deregulatory move. The relaxing of the “Volcker Rule” would allow thousands of banks to make high risk profit-seeking trades with less government oversight.

If the Fed’s plans go ahead, increased systemic financial risk could well push citizens to conclude that “cryptocurrencies do a fundamentally better job as a safe depository,” Weiss analysts argue.

According to Weiss, banks are lobbying for more freedom to trade speculative assets such as derivatives, whose ownership is “extremely centralized.”

“These potentially toxic assets [such as derivatives] are not simply investments and speculations banks make with their own capital,” but pose risk to clients’ own deposits in the event of another major system crisis, Weiss claims.

Weiss argues that while the public on average assumes that banks provide them with “simple, safe and unencumbered storage for [their] savings,” the reality is that the traditional monetary system – especially if deregulatory momentum sets in – continues to offer banks “rich rewards for excessive risk-taking.”

As Cointelegraph reported last year, scandals and failures have turned public sentiment against the traditional banking system in the past, with one report finding that as many 92 percent of millennials firmly expressed their distrust of banks.

Geopolitical turbulence is another threat factor, as most recently shown by the dramatic collapse of the Iranian rial in response to the U.S. withdrawal from the nuclear deal. Anticipating renewed U.S. sanctions, Iranian citizens preemptively withdrew $2.5 bln in crypto out of the country.