Crypto markets are seeing a healthy flush of green, with most of the top ten coins seeing solid growth between 1-7% over the 24-hour period.

July 26: crypto markets are seeing a healthy flush of green, with most of major crypto assets seeing solid growth over the 24-hour period, as data from Coin360 shows.

After leading last week’s major market rally when Bitcoin (BTC) broke the $8,000 psychological price point, the leading cryptocurrency has been consolidating its gains. Altcoins are also holding market confidence, with most of the top ten coins by market cap seeing growth of between 1 and 7 percent on the day to press time, according to CoinMarketCap. 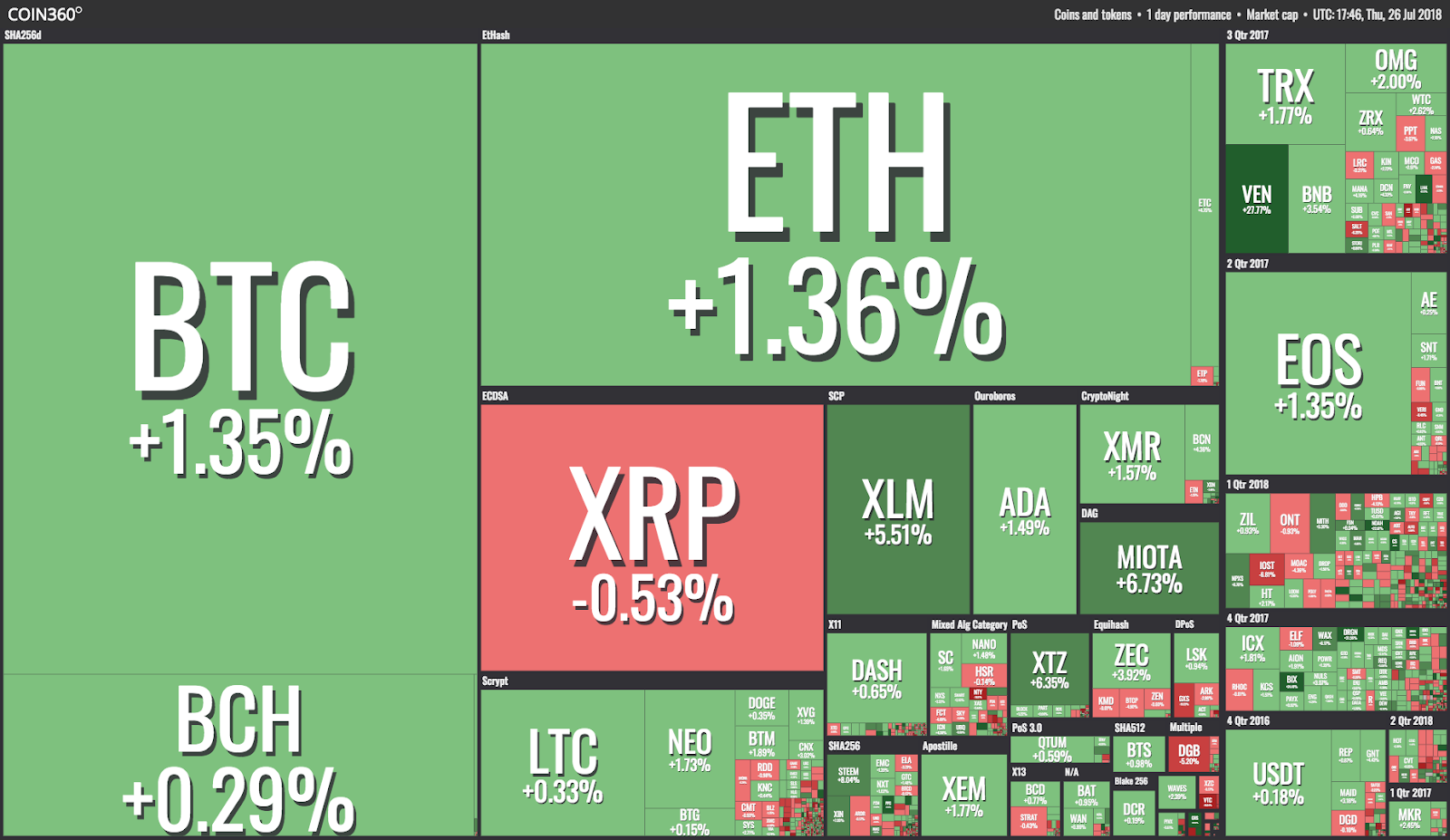 Bitcoin (BTC) is trading around $8,230 to press time, up just over 1 percent on the day. The largest cryptocurrency peaked at just below $8,300 earlier today — nonetheless shy of its weekly high of $8,431 yesterday, July 25. 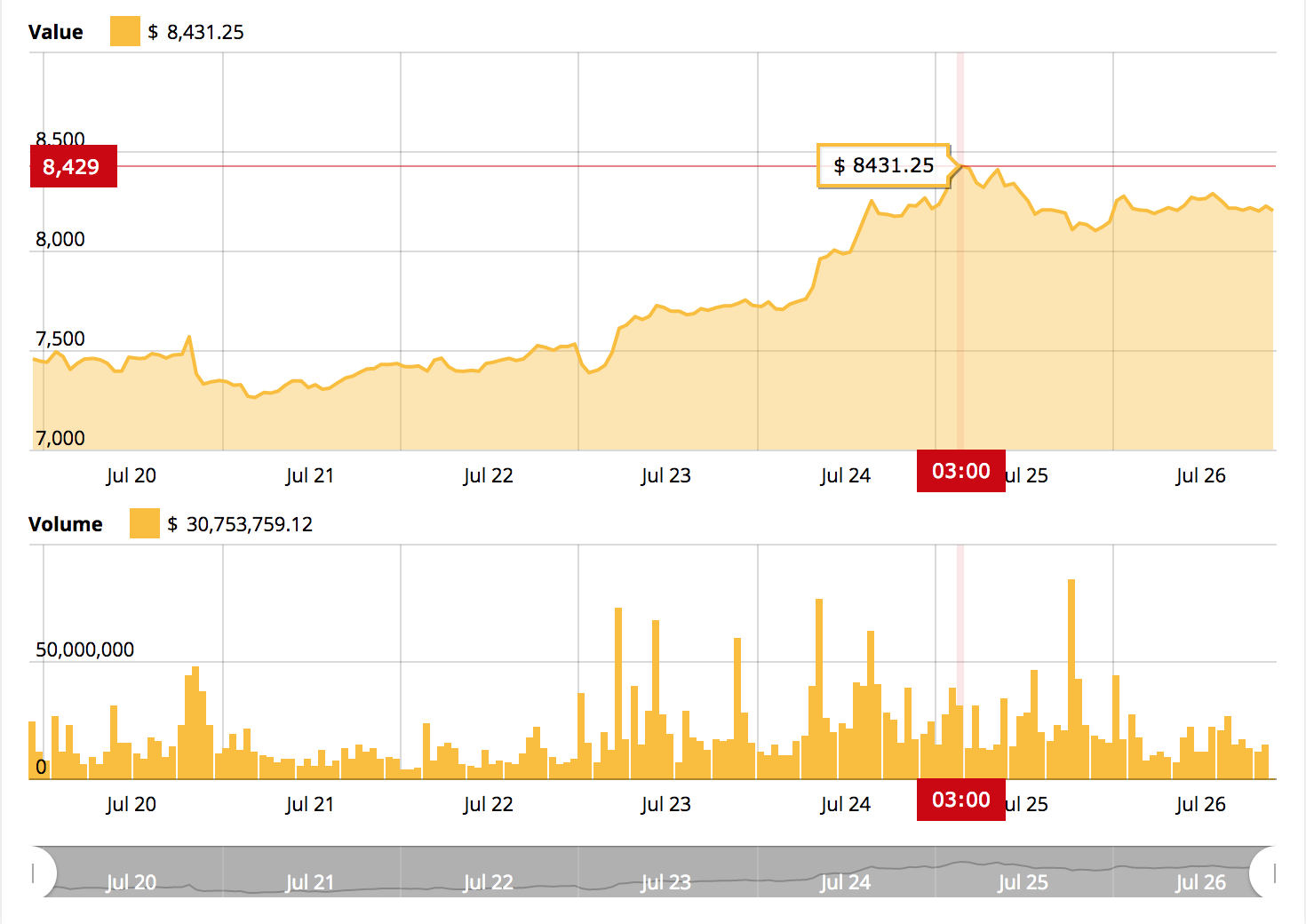 Bitcoin’s weekly and monthly gains are at a bullish 11.9 and 33.3 percent respectively, according to data from Cointelegraph’s price index.

BTC dominance by market capitalization is at 46.9 percent according to CoinMarketCap, just under yesterday’s level, but still slightly above the 2018 record-high posted earlier this week.

Ethereum (ETH) is trading around $478 at press time, seeing around a 1 percent gain on the day. The altcoin saw a bullish surge to $483 earlier today and has subsequently slightly retracted to its current level. Ethereum has now brought its weekly and monthly price performance into solid positive territory, with gains of around 3 and 9 percent respectively. 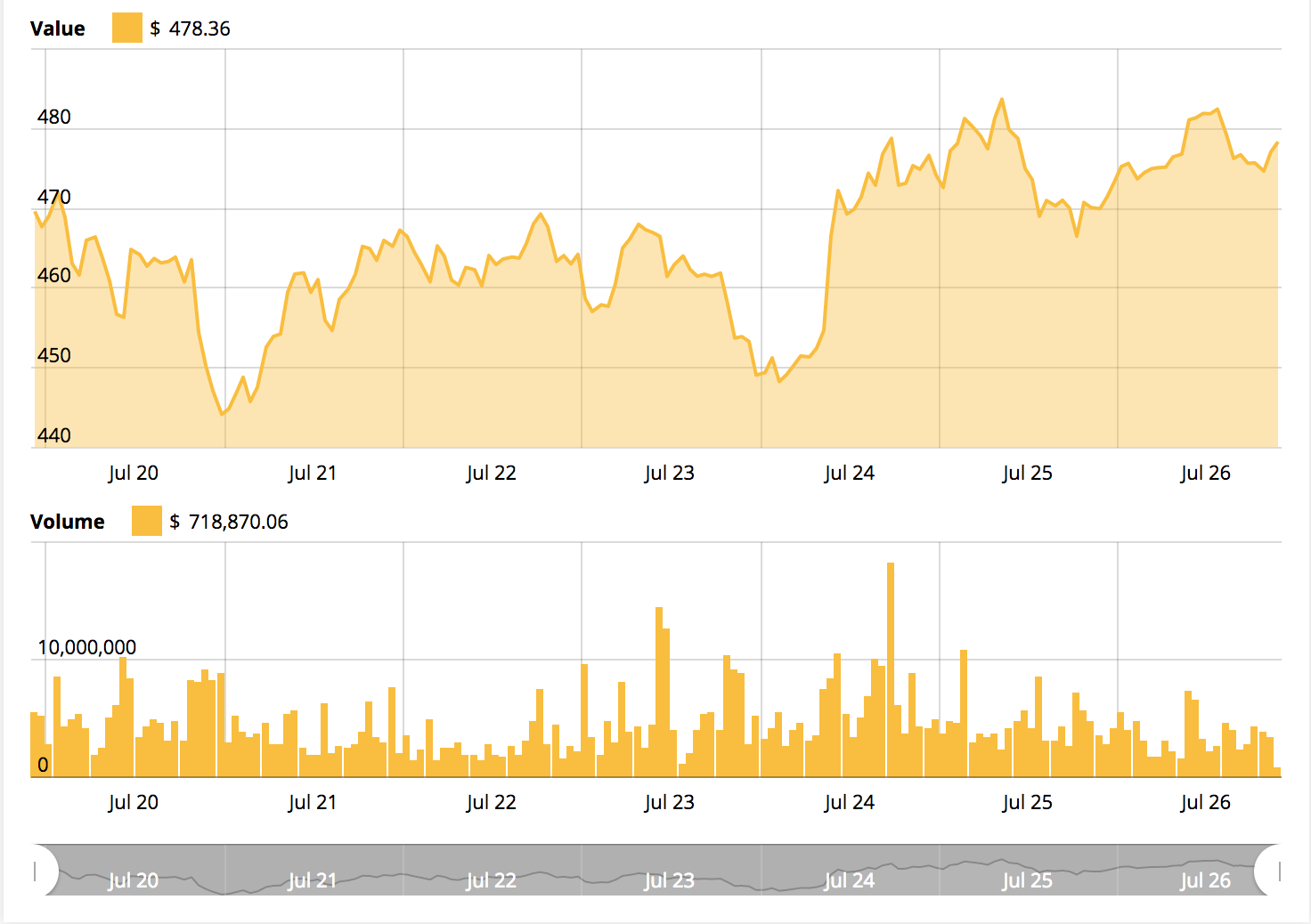 On CoinMarketCap’s listings, almost all of the top 10 coins by market cap are all in the green, with only Ripple (XRP) seeing a small loss on the day of about half a percent, trading at $0.46 to press time, according to CoinMarketCap. Litecoin (LTC) is also seeing minor losses on the day, down just 0.18 percent to trade at $86.75 by press time. The last top ten coin in the red is Cardano (ADA), also down just a fraction of a percent, trading at $0.17 per coin.

Of the top ten coins, IOTA (MIOTA), the ninth largest cryptocurrency by market cap, has performed the strongest today, seeing over 7 percent growth to trade at $1.05 to press time.

Of the top 20 coins on CoinMarketCap, VeChain — ranked 17th by market cap — has skyrocketed almost 28 percent on the day, trading at around $2.51 to press time, and hitting as high as $2.66 earlier today. 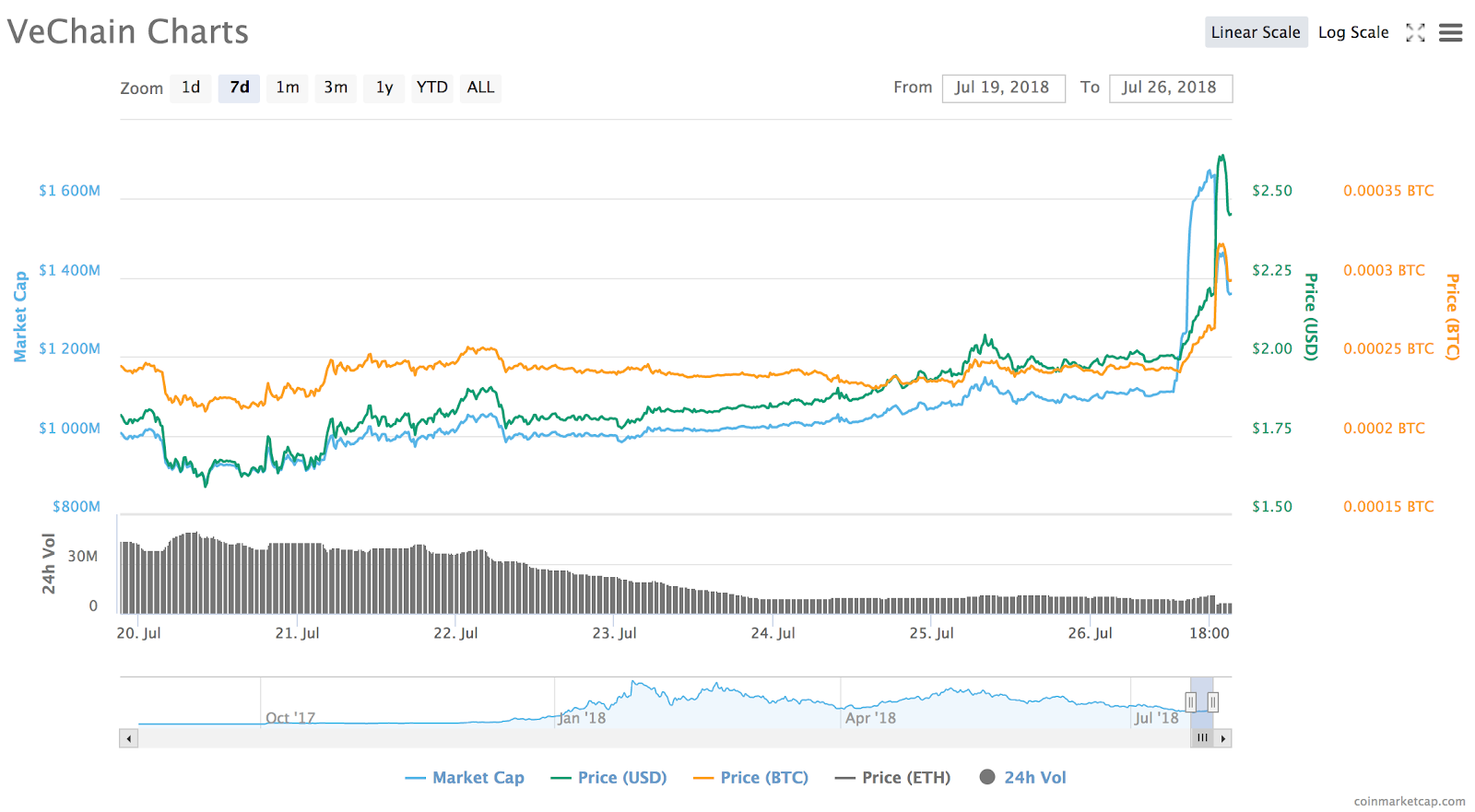 Total market capitalization of all cryptocurrencies is around $302 billion at press time, after surging to as high as $303.7 billion earlier today.

At a U.S. house committee hearing yesterday, the chairman of the U.S. Commodity Futures Trading Commission (CFTC) said that the government is lagging “four years behind” and urgently needs to test blockchain technology to "see how it can help us do a better job as regulator.”

Crypto investors have been closely eyeing both the CFTC’s and the U.S. Securities and Exchange Commission (SEC)’s evolving regulatory stance towards the industry. Recently, attention has focused on the latter’s potential approval of crypto-based exchange-traded funds (ETFs), which some consider could be a “holy grail” for the market.

Recent news that the $6.3 trillion asset management heavyweight BlackRock –– the world’s largest provider of ETFs –– is beginning to assess potential involvement in Bitcoin has been credited by some with triggering this month’s ongoing impressive rally, that kicked off July 16.

This week, the SEC delayed its decision on a Bitcoin ETF application from investment firm Direxion, the same day as digital asset manager Bitwise filed its own application with the regulator for an ETF that would track an index of ten cryptocurrencies.