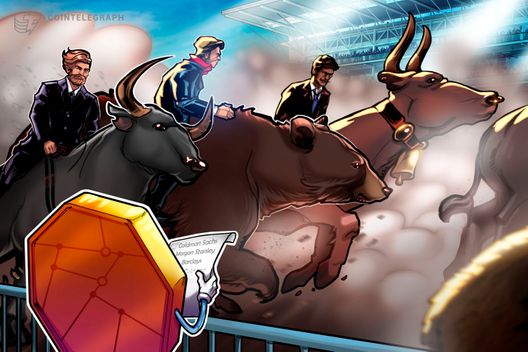 Banks started by scoffing at crypto but now they are racing to be first to market with a crypto trading desk.

September 12, 2017 will go down in infamy when talking about the relationships between traditional fiat financial institutions and their views on cryptocurrency. It was the day that JP Morgan CEO, Jamie Dimon, called Bitcoin a ‘fraud’.

A lot has happened in the financial and crypto space in the eight months following that event, especially in terms of banking institutions and Wall Street’s perception of Bitcoin and cryptocurrencies. As Bitcoin started making a few waves in traditional finance, Wall Street-types were polarized. Some scoffed at the idea of digital, decentralized currency, while others took note and saw potential.

It has now come to a point where the financial fiat sector is dipping more than just a toe into the cryptocurrency world; with futures trading now well established and blockchain experts being hired left, right, and centre. There is a definite race on now for major banks to start offering clients the chance to trade cryptocurrency through their offerings.

On May 3, Goldman Sachs, a financial institution that has done a turnaround in terms of its attitude towards cryptocurrency, announced that it does not believe Bitcoin is a fraud. This was a hark-back to those famous words from Jamie Dimon, but more importantly, they also announced their plans to start trading crypto.

Commenting on the decision, Rana Yared, an Goldman Sachs executive involved in creating the offerings, said the bank had been “inundated” with client requests.

“It resonates with us when a client says, ‘I want to hold Bitcoin or Bitcoin futures because I think it is an alternate store of value.’”

Goldman’s path to potentially get its own cryptocurrency desk up and running has taken a long and winding path.

In early 2014, Goldman declared that Bitcoin was not a currency, and also said separately that it is too risky for banking companies investors. However in 2017, Goldman was starting to consider letting investors trade Bitcoin directly, and also one of the top five most active corporate investors in blockchain technology.

It was at the end of Jan. 2018 when Goldman Sachs also refuted rumours that they were starting a crypto trading desk, but as it turns out, their stance may well be softening.

There are also rumors swirling around Barclays Bank potentially opening a crypto trading desk, but these too have thus far been refuted.

Barclays Group CEO Jes Staley picked out compliance and regulatory barriers as their biggest issue, but also spelled out this growing race to be ‘in the forefront of technology improvement in finance’:

“Cryptocurrency is a real challenge for us because, on the one hand, there is the innovative side of it and wanting to stay in the forefront of technology improvement in finance… On the other, there is the possibility of cryptocurrencies being used for activities that the bank wants to have no part of.”

Still, it has been reported that Barclays is gauging institutional demand for cryptocurrency to determine if the new business model is feasible. It has been said that a crypto-trading operation would require approval from Tim Throsby, CEO of Barclays International, and possibly Jes Staley.

A spokesperson at the bank later issued the following statement:

“We constantly monitor developments in the digital currency space and will continue to have a dialog with our clients on their needs and intentions in this market.”

Morgan Stanley is another major bank that looks to be in the race to open up this crypto-trading operation, more so, it looks to be focusing a lot of effort into being the first-to-market. Morgan Stanley and Goldman Sachs have a long standing rivalry, and in this ‘Arms Race’, the first to get a successful crypto trading desk up would take a lot of plaudits.

There are reports, from an unnamed source, that Morgan Stanley is focusing virtually all of its attention on cryptocurrency trading as of right now. The source from inside Morgan Stanley allegedly said:

“Several of us have been reaching out to what we would call ‘mid-tier’ money managers that we know are on the cusp of opening crypto focused hedge funds. We have done some work with pure-play crypto funds as well, but we’ve been more specifically tasked to engage with firms that are apt to add to their current portfolios as opposed to starting from scratch.”

“I can’t tell you who those are, as we are under NDA’s with several, but you can bet that things are moving quickly and deals are being struck. And you can guess why.”

“Goldman is taking a different track than we are and our directives seem to have them in our sights at the moment. If we are able to engage on a 1 on 1 basis, as opposed to through third parties [such as] Circle, then we ultimately lead in the space.”

The source goes on to liken this building towards crypto trading as an arms race between the two banks, but ultimately, they are not the only ones trying to reach the goal first.

“Truth be told this is the next arms race. Everyone is rushing into cryptos. Everyone. There isn’t a bank, a fund, a fund company, a former legend attempting to reclaim old glory, private equity, venture capital, lending, exchanges, consulting firms – everybody.”

In this frenzy to appease customers and their want of cryptocurrencies, even the owner of the New York Stock Exchange (NYSE) is considering letting customers buy and hold Bitcoin. It is again a bit cloak-and-dagger as the source article from the New York Times cites “emails and documents” as well as four anonymous sources.

The move by NYSE owner Intercontinental Exchange (ICE) is a little different in its approach too as there clearly is no defined path as to how to get Bitcoin to the traditional masses.

“[ICE] has had conversations with other financial institutions about setting up a new operation through which banks can buy a contract, known as a swap, that will end with the customer owning Bitcoin the next day — with the backing and security of the exchange,” the Times wrote.

NASDAQ has also hinted that it would be happy to put its hat in the rind, but only when the markets mature enough for it to be viable.

“Certainly, NASDAQ would considering become a crypto exchange over time.”

The CEO is of the opinion that cryptocurrencies will not be going away but that they are still far from being mature enough; regulations and government acceptance a big role player in determining when they will be ready for the likes of NASDAQ to get on board.

Everyone is getting onboard

What the Morgan Stanley source is saying seems to ring true in the world of banking. Not only is it the crypto asset that is attracting these institutions to try and be first-to-market, it is the development of the blockchain technology and all that can offer the financial world.

“All banks are realising they need to get onto this Blockchain boat, I don’t think many banks necessarily understand where the boat is going, but they realise that this is a development that is taking off and that if they want to be on this journey that everyone is going on, they need to be on the boat.”

NASDAQ CEO: #cryptocurrency is the “right next step in the space of currency” because a “globalized payment mechanism” is a natural fit for the cross-border digital economy.

It was only a matter of time before these rumours and rumbling turned into a full scale sprint, and it looks as if it really is the Chicago Mercantile Exchange (CME) and the Chicago Board Options Exchange (CBOE) who can be credited with opening the floodgates with their foray into Bitcoin futures trading.

The release of their futures tied in with the height of Bitcoin’s biggest rally towards $20,000 and although initial uptake in Bitcoin futures was tepid, this is expected to change as investors more averse to risk look for safer ways to enter the market.

The CBOE is now even championing the cause for Bitcoin ETFs, this comes after the Winklevoss twins failed in their bid in 2017. Dennis O'Callahan, CBOE’s director for product development, spoke to Cointelegraph in March, indicating that they are not stopping at just Bitcoin futures.

“Being in product development our task is to look for new products all the time, so we are constantly evaluating that market, and we are evaluating other cryptocurrencies too, among other items.”

The banking sectors rush towards cryptocurrencies has clearly been predicated on the pick up of interest in Bitcoin as a valuable and investable asset. There’s enough evidence out there to suggest that many institutional investors are planning to venture into cryptocurrency.

In Nov. 2017, Triad as well as Datatrek Research conducted a survey, garnering responses from 317 institutional traders on whether or not they have interest in investing in Bitcoin and other cryptocurrencies.

According to the research, 36 percent of institutional investors were considering buying Bitcoin while 19 percent already had. The so-called ‘arms-race’ to be the first to bring out a crypto trading desk makes sense, the institutionalised investor market is clearly hungry for a safe, regulated, and familiar way to be involved in cryptocurrency.

This has been proven by surveys, by the interest in Bitcoin futures from CBOE and CME, and by the way in which banks, and financial institutions are putting their foot in the door.

There is no doubt that whoever does get their product out first will be highly profitable, and if the response is anything like the build up to the release of futures, Bitcoin could be in for another huge rally.