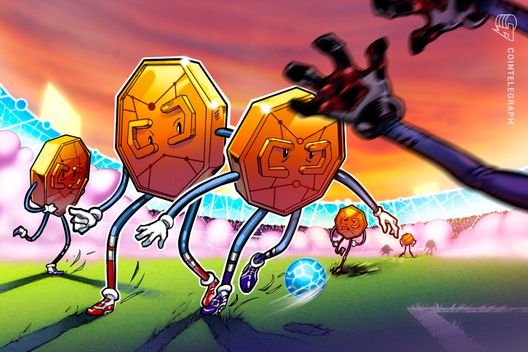 Football fans have plenty of ways to use cryptocurrency at the World Cup.

Major sporting events always attract a massive amount of attention across the world and it is encouraging to see cryptocurrencies being integrated into the many aspects of the event.

We’ve seen this happen at the Super Bowl and the Winter Olympics in the past six months, so it’s not surprising that Bitcoin and cryptocurrencies are becoming far easier to use in the many industries involved in these major events — from hospitality to gambling.

Every four years the global sporting community feasts on a festival of football at the World Cup, as the world’s most popular sport takes centre stage.

Football, in its current form, was birthed around 1863 in England, but its origins stem from numerous games played throughout history, according to FIFA. Over the past 100 years the game has taken hold in countries around the world, in part due to its simplicity and ease of access.

Given its status as the biggest sport in the world, the FIFA World Cup has inevitably become the most watched sporting event and fans travel the world to support their teams, wherever the tournament is being hosted.

The 2018 World Cup is currently underway in Russia, with 11 cities and 12 stadiums playing host to 64 matches during the month-long spectacle.

The country is expecting more than 570,000 international visitors over the duration of the competition — with the influx of foreign tourists also expected to provide a boost to the Russian economy.

Travelling tourists provide a need for adequate accommodation and foreign exchange facilities, and this is where cryptocurrencies have come to the forefront at the World Cup.

In the four years since the last World Cup, cryptocurrencies have grown immensely. The proliferation of the industry came to a head last year, as Bitcoin, Ethereum and a number of altcoins reached all time highs.

With that being said, football fans were able to bet on the 2014 World Cup in Brazil with Bitcoin using Bitkup’s platform.

While the markets have cooled considerably, the availability and ease of access to cryptocurrency wallets and exchange platforms has continued to grow.

This seems to be the case at the World Cup in Russia. Another factor is that Russia is still operating under economic sanctions.

Bitcoin for hotels, booze and flights

In the build up to the tournament, Kaliningrad hotel chain Apartments Malina announced that customers would be able to book and pay for accomodation using Bitcoin.

The manager of the chain, Anna Subbotina, said the move was a forward-thinking initiative that could blaze the trail for the hotel industry:

"Cryptocurrencies are now enjoying increased interest. Gradually, they will come into use as a means of payment. And we decided that the fans should be able to pay for our services with the help of this innovative technology. It may very well be that other hotels awaiting [sic] our example for the forthcoming football holiday.”

Accomodation is not the only thing that tourists can use cryptocurrencies for during the World Cup. Killfish, a chain of bars in Russia, is accepting Bitcoin for booze as part of an extensive promotional program that promises great discounts.

Getting to Russia in the first place was also possible with cryptocurrencies. Cheapair has been accepting Bitcoin as a payment method since 2013, and with flights to Russia available through the airline, people could have easily made their way to the country using the cryptocurrency.

Travel agency Destinia also accepts Bitcoin as a payment method for its clients, and football fans using the service provider to get to Russia had another avenue to spend their BTC to enjoy the tournament.

With many sports, betting has become part and parcel of the experience. Die-hard fans are willing to put plenty of money on the line in hopes of striking gold in terms of their luck — and they can also do it using cryptocurrency.

There are a number of sport betting platforms that have adopted cryptocurrencies as a payment and betting option. Intertops and Bodog are two examples of betting websites that accept cryptocurrency bets as well as normal fiat betting.

The market is still one that needs a lot of development, but a number of platforms are working hard to become leaders in the cryptocurrency sports betting space.

Once you’ve found a platform you feel comfortable with, you still need to do some research before you start putting down bets on the outcomes of games. With this in mind, a US-based platform is working hard to provide a blockchain-powered solution for reputable betting tips.

More recently, developers have produced Blockchain-based applications (Hero, Winstars, Dragon Inc.) that provide betting advice to their users. Such platforms record predictions of sporting events on a blockchain, providing transparent public records of betting predictions. Users are able to access all records, which allows them to check other bettors track record to ensure validity of betting odds and advice.

Plenty of crypto-goals at the World Cup

By the time the next World Cup rolls around, far more service providers could be actively using and accepting cryptocurrencies as a payment method.

As previously mentioned, betting with Bitcoin was possible at the 2014 World Cup — so the sky is, quite literally, the limit when it comes to the possibilities of crypto adoption and blockchain solutions being far more prevalent in 2022.

With the next football global showpiece being hosted in Qatar, there is even more reason for cryptocurrency development and adoption in the Middle East.

The industry received a boost when an Islamic scholar produced a report that suggested that Bitcoin is Halal, and conforms with Islam and Sharia law.

With four years to go, there is plenty of time for the blockchain and cryptocurrency sector to grow in the region.

Twitter Evidence May Prove Hal Finney Is Not Satoshi