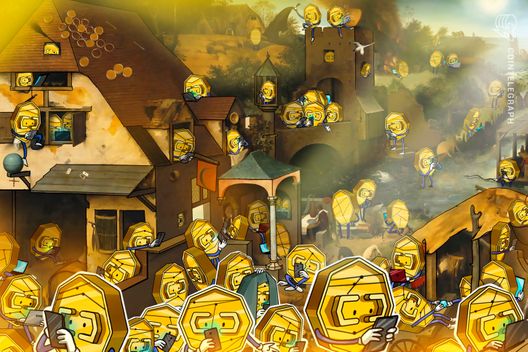 In what could be some earth shattering news for Ethereum – the world’s second largest cryptocurrency – US regulators will apparently be discussing whether or not it should be classified as security next week on May 7. If yes—it should have registered with the SEC back in 2014.

Last year, South Korea banned any new Initial Coin Offerings (ICO) from being held in the country, but a new bill introduced by South Korean lawmakers could open the ICO market back up, albeit one now strictly supervised by government regulators. The passage of the bill could signal the start of a less FUD-y crypto stance coming from the country.

Investment banking giant Goldman Sachs will be opening a crypto trading desk after being “inundated” with requests from clients desperate to get their fingers in the crypto pie. This decision means that the company has officially decided that “Bitcoin is not a fraud.”

BMW, GM, Ford, Renault, along with a total of thirty participants ranging from IBM to IOTA, have partnered to launch the Mobility Open Blockchain Initiative (MOBI) that aims to make transportation “safer, greener, and more affordable.”

Mastercard’s fourth quarter growth is down by two percentage points, a drop attributed to a decrease in credit card purchases of cryptocurrencies. Mastercard’s CEO hypothesizes that uncertainty in Asia could be the reason for the crypto spending contraction.

"Someone else is trading turds and you decide I can't be left out,” — Charlie Munger, Berkshire Hathaway VP

"All that it takes to make a credible idea into a fad is people just switch off their brains and stop thinking. Over 20 years in and around the banking industry — blockchain is a fad, but I have seen many fads in my career. If 10 percent of what I've heard in my career had come true, we would have these amazing banks that run for £1 a week," — Martin Walker, director of the Center for Evidence-Based Management

“I would not describe myself as a true believer who wakes up thinking Bitcoin will take over the world,” — Rana Yared, Goldman Sachs executive working on opening their crypto desk

“All this talk of decentralization is just bulls**t […] You’re just making stuff up,” — economist Nouriel Roubini aka Dr. Doom, predictor of the 2008 financial crisis

Crypto-Friendly Legislation In Belarus May Get KYC Update

A March decree in Belarus, designed to bring in crypto innovation to the country with the creation of a High Tech Park (HTP) meant to rival that of the US’s Silicon Valley, may be getting an update with some more stringent KYC requirements. Local sources says that companies that want to open a crypto exchange in Belarus’s HTP will be required to provide info on their management structure and customer data and communications, which must be stored for five years. This may not be the news that will attract those anonymity-loving crypto exchanges to the country.

Australian Financial Regulator Promises To Protect Its Citizens From Crypto

Down under in Australia, their Securities and Investments Commission (ASIC) has reported it will be “taking action” to protect consumers in the ICO space, meaning that all Australian ICOs need to confirm that they are not in fact misleading investors and engaging in unlicensed conduct, or face being halted by this government regulator.

The Colorado Department of Regulatory Agencies announced that it is investigating two ICOs–a “LindaHealthCoin” for purchasing health insurance and a token advertised by Broad Investment as an equity token that represents shares in the company–due to a failure to provide info on the risks of crypto investments and ICOs. The two companies now need to prove why their tokens don’t fall under the Colorado Securities Act, or stop token sales.

The Arizona House of Representatives has passed a bill that originally would have allowed its state’s citizens to pay their taxes with cryptocurrencies, but amendments to the bill mean that the Department of Revenue now just has to consider the possibility of alternative forms of payment.

Blockchain Tech Reaches Governments, Scientists In The US, Banks In South Korea

Subcommittees of the US House of Representatives will be meeting next week for a hearing on how blockchain tech could help streamline supply chain management as well as prevent the production of counterfeit goods; a major science research marketplace has unveiled plans to track and validate research data on a blockchain platform; Berkeley’s city council has voted yes on a pilot program to sell municipal bonds with blockchain tech; and South Korea’s central bank is considering blockchain and crypto as possible ways to help it achieve a “cashless society.”

UNICEF Australia has hopped on the crypto wave with the innovative idea of asking for donations via the borrowing of a user’s computer processing power to mine for crypto–almost 8,000 people have donated so far.

Iran–a country whose central bank banned banks from dealing with crypto a mere two weeks ago–has announced that their “experimental model” of a domestic cryptocurrency is now ready. It’s as of yet unclear whether this digital currency will be made available to the public, and in that case, whether the majority-government owned Post Bank, or another financial entity would be the one to issue it.

Banking giant JP Morgan Chase has filed a patent for a peer-to-peer payments network that would use distributed ledger technology like blockchain for both intra- and inter-bank settlements (sounding a bit like RippleNet to us). The P2P platform would use blockchain to process payments in real time, not relying on a trusted third party for holding the audit trail.

Dubai, in yet another step in its 2020 Blockchain Strategy, has announced a partnership with IBM to launch a blockchain business registry. The partnership will be helped by Smart Dubai, the Dubai Silicon Oasis Authority, and Dubai’s Department of Economic Development.

As part of the seemingly endless exodus of Wall Street execs to the crypto sphere, three analysts at BlackRock have quit in order to found a $20 mln venture capital fund, Eterna Capital, which will focus on blockchain projects.

Yet another Goldman Sachs executive has joined a crypto startup, this time a Malta-based fintech platform for a financial marketplace allowing crypto investors to get instant cash against crypto collateral. Users will get a cash advance on their Mastercard or Visa credit cards without a bank-like credit check, and can then choose to sell their crypto whenever they feel the price is favorable.

Ethiopia’s government signed a memorandum of understanding (MOU) with altcoin Cardano with the intent to begin using an agritech platform based on Cardano’s blockchain platform by the end of the year. 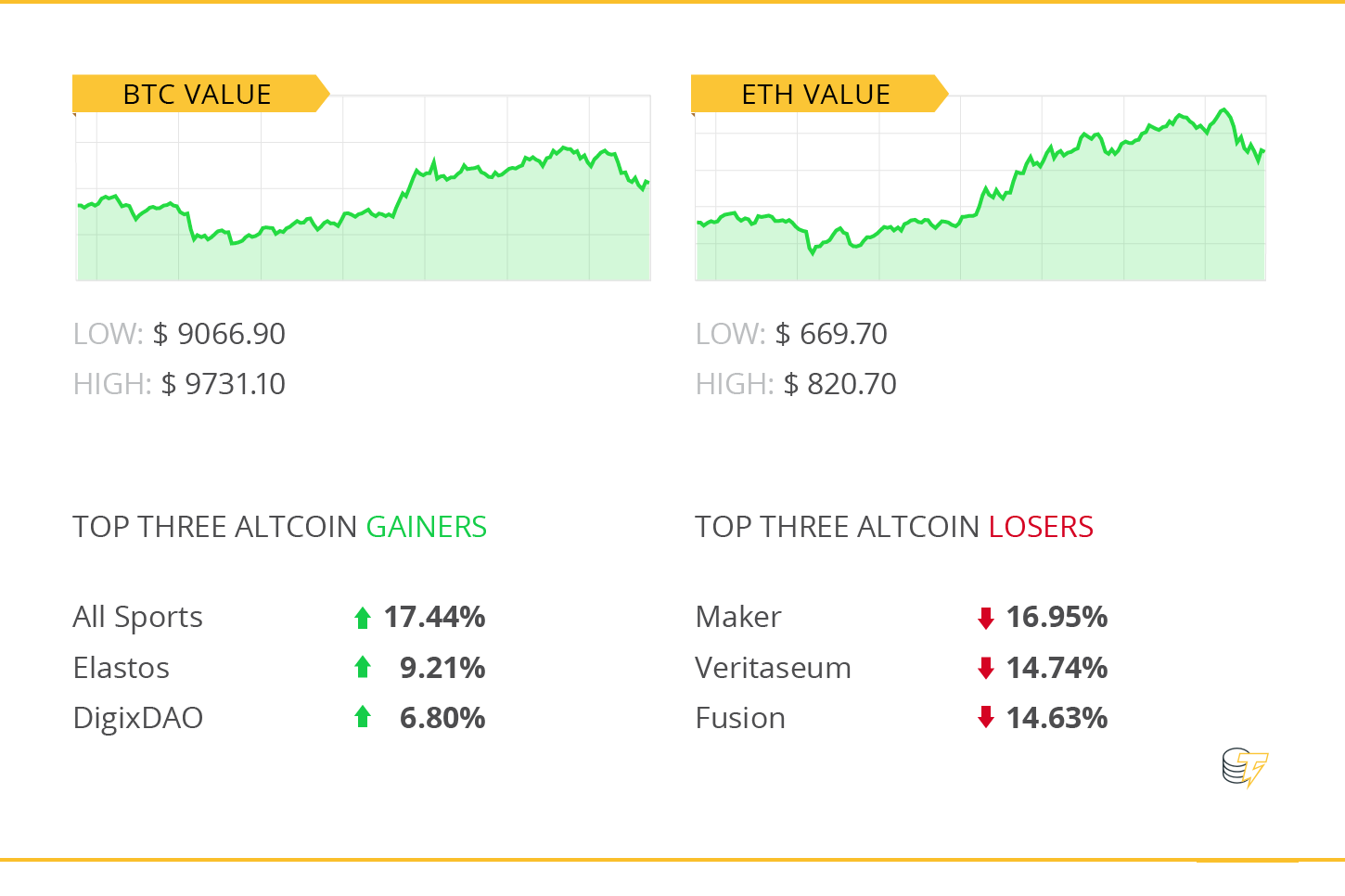 The end of the week has seen the crypto market mostly in the green, with BTC and ETH back over their psychological price points of $9,000 and $700 respectively. Total market cap is at around $450 bln.

For more info on crypto prices, make sure to read Cointelegraph’s market analysis.

FUD Of The Week

In more IOTA news–not a smear campaign, just reporting facts, please believe us, IOTA twitter trolls! — University College London has cut ties with the IOTA Foundation, citing that it is “inappropriate for security researchers to be subject to threats of legal action for disclosing their results.” UCL seems to be referencing the resurfaced allegations against some specific IOTA Foundation members of not responding too well an articles critiquing the cryptocurrency last fall.

In another story of overeager Twitter users succumbing to too-good-to-be-true crypto giveaways, cryptocurrency Vertcoin’s Twitter was hacked this week, with the scammers promising a possible prize of 10 BTC if you participated by sending them 0.005 BTC first. Since not everyone can change their name like “Vitalik ‘Not giving away ETH’ Buterin,” it’s better for all Twitter users to assume every crypto giveaway is fake from here on out.

The director of a British think tank, the Center for Evidence-Based Management, told Parliament that blockchain is “pixie dust” and “magic wands.” We have no response to this magical malarkey.

Bitcoin Cash opponents have dropped the idea of a lawsuit against Bitcoin.com, citing a lack of cash to get the suit started. Their beef with the site is that it allegedly blurs the distinction between Bitcoin Cash–a Bitcoin fork from August 2017–and Bitcoin, which they view as the “core” Bitcoin blockchain.

Prediction Of The Week

Reddit co-founder Alexis Ohanian said in an interview this week that Ethereum’s price will hit $15,000 this year, which would mean more than a 20 times price increase. Ohanian, who now works at a venture capital firm, also said that Bitcoin would hit $20,000 by the end of the year, a price point the coin already reached last December.

Is EOS Worth The Hype?

As altcoin EOS’s price has risen this month by around 70 percent, and its market cap is now more than Litecoin and Cardano combined, two crypto thinkers have weighed in as to whether or not EOS is worth “the hype.” Managing editor at Crypto Chat Matt Leibowitz thinks it isn’t–EOS: Don’t Believe The Hype–while Daniel Jeffries takes radically diametric point of view, putting EOS on a pedestal as the Goddess of the Crypto Dawn.

Blockchain Could Be The Answer To The US Opioid Crisis

Intel and the pharmaceutical industry come up with an innovative way to combat America’s rising opioid crisis–blockchain tech.

How Cryptocurrencies Compare To Traditional Assets

Bloomberg put together a comprehensive 16 month analysis of just how cryptocurrencies shape up in comparison with traditional asset classes. The main takeaway? Crypto’s future is unknown (which we already knew) but the article is full of colorful graphs and charts that tell you why we can’t predict the future.