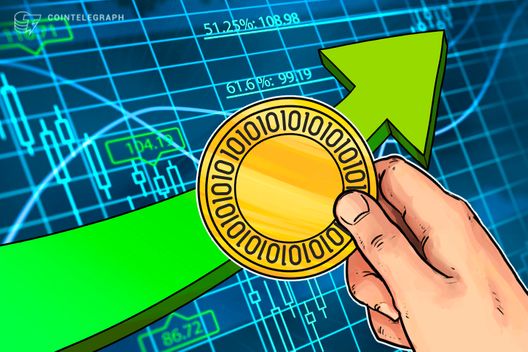 BTC is now solidly over $8,000 and ETH has passed $500 during another day of market growth

The cryptocurrency markets are continuing to grow substantially Friday, April 13, after Bitcoin’s (BTC) jump yesterday of over $1,000 in 30 minutes, with BTC today above $8,000 and Ethereum (ETH) having broken above $500 for the first time since March 26. ETH is up by over 22 percent over a 24 hour period to press time, currently trading for around $513. 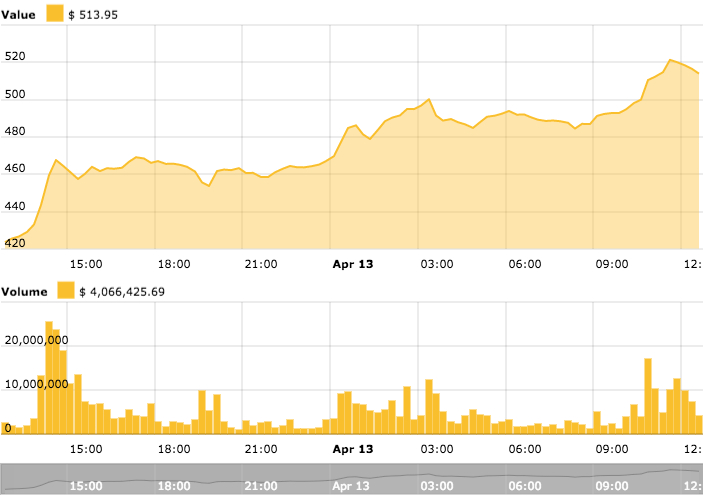 All of the top ten coins are CoinMarketCap are in the green, all with gains of more than 10 percent on the day. IOTA has seen the most growth, up more than 35 percent over a 24 hour period and currently trading around $1.42.

Total market cap is now solidly above $300 bln, at around $323 bln by press time, having jumped around $52 bln since yesterday. The overall price spike could be attributed to a report released yesterday that crypto is generally permissible under Shariah law, but the week has seen other positive crypto news that could have contributed in a big way as well.

Fundstrat’s Tom Lee sees the reason for the rise as a combo of Santander’s news that they would launch a Blockchain-based international payment service with Ripple, that crypto selling for taxes is almost at its end, and that “speculative short investors [are] being squeezed out of the market for the surge,” according to Bloomberg.

According to Miguel Shwiezer, the co-founder of hedge fund Quantia Capital, the price jump caused short sellers to close positions, “spurring a waterfall of buy orders.” Bloomberg writes that there were more than 38,000 Bitcoin shor positions as of April 12 on Bitfinex, and short positions have now dropped to around 24,000, according to data from TradeView.

This week also saw a plethora of Wall Street money and talent moving into the crypto sphere and possibly influencing the crypto markets —reports circulated that billionaire investor George Soros would begin to have his family office trade in cryptocurrencies, the Rockefeller’s venture capital arm partnered with Coinfund to support crypto and Blockchain development, and a Goldman Sachs executive reportedly left to join Mike Novogratz’s future crypto merchant bank.

In response to the relatively unexpected price rise, crypto Twitter has responded with a variety of memes and jokes. Cypherpunk Jameson Lopp posted a screenshot of two news articles claiming that BTC’s price was unlikely to rise:

Twitter user CryptoSqueeze posted a gif of unexpected monetary gain via the computer:

And Twitter use CarpeNoctom posted that he couldn’t remember if BTC’s price over $7,500 was “good or bad”:

bitcoin price has been so volatile, I woke up and couldn't remember if 7500+ was good or bad