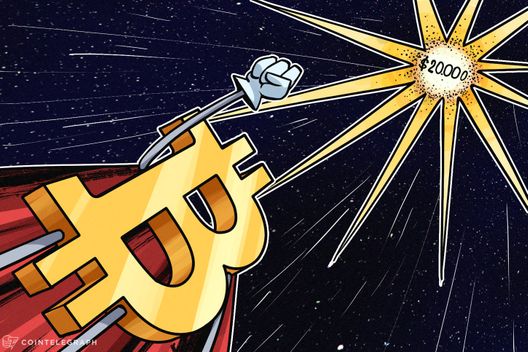 Cryptocurrency hedge fund says that BTC’s drop to $6,500 was most likely a low for the currency, which will “most likely” surpass $20,000 again this year.

Pantera Capital Management, a hedge fund with a focus on cryptocurrencies, said in their April newsletter that Bitcoin’s (BTC) price of $6,500 was probably the low for the cryptocurrency, and that it was “highly likely” BTC’s price will reach above $20,000 this year, the Wall Street Journal (WSJ) reported Friday, April 13.

In December of last year, CEO of Pantera Capital Dan Morehead predicted that Bitcoin’s price could drop 50 percent before it reached new highs, a prediction whose first part has come true, as BTC dropped below $7000 in February – a 65 percent drop.

In the April newsletter, Morehead wrote that he “rarely [has] such a strong conviction on timing. A wall of institutional money will drive the markets much higher.” Earlier this week, several Wall Street players made steps into cryptocurrency as the Rockefeller’s venture capital arm Venrock partnered with crypto investment firm Coinfund.

Morehead added that his “professional opinion is that we’re in the first innings of a multi-decade trade,” as Bitcoin recently fell below its 200-day moving average, a “rare buy signal:”

According to Morehead, he has only made four other crypto trade recommendations in the past.

A possible reason for BTC’s recent price upswing is a slowing down of the selloff of crypto holdings in preparation for tax day in the US on April 17, which was an explanation put forward by Fundstrat’s Tom Lee for the crypto market’s general downturn since the new year.

Morehead agrees with this analysis of the crypto market’s post-new year sinking, writing that he could “imagine that a portion of the selling pressure on the market in general has been unintended tax positions.”