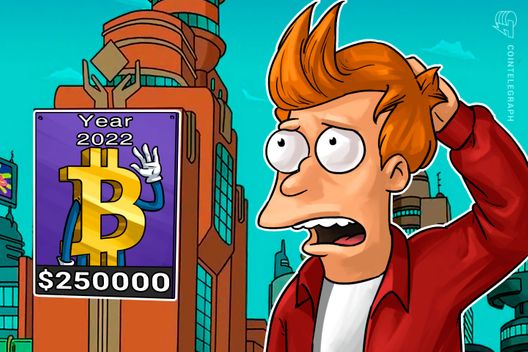 Tim Draper predicted BTC could hit $250,000 by 2022, and CNBC Fast Money’s Brian Kelly sees this potential 3000 percent return as a “continuation of the trend.”

After investment tycoon Tim Draper said earlier this week that Bitcoin (BTC) could hit $250,000 by 2022, CNBC Fast Money’s Brian Kelly has supported this prediction in a CNBC interview from yesterday, April 13.

Kelly continues by noting that an increase of institutionalized money into the crypto sphere – Rockefeller’s VC arm, a Goldman Sachs executive, and Soros Fund Management – may dampen the volatility of cryptocurrencies, making them easier to use as actual currencies, and making it take four years (rather than two) to reach Draper’s suggested 2022 price point.

Right now, the most common use case for crypto in Kelly’s opinion is citizens in countries with unreliable governments or banking systems. After being questioned by a friend as to why anyone would risk losing 20 percent or more with a crypto investment, Kelly said that he responded: “Well, listen, it’s better than losing 100 percent if your assets are seized by a rogue government.”

When asked about how Fundstrat’s Tom Lee’s analysis of a crypto selloff before tax day being the reason for the market’s downswing since the new year can be reconciled with the fact that about two thirds of the crypto market’s volume are in Asia (and thus unaffected by US tax day), Kelly referred to tax selling as just the “fuel on top” of the market trend.

According to Kelly, the parabolic run as well as a decrease in transactions, as well as the Mt. Gox sell off, all contributed to the market’s past downward swing.

This week, crypto hedge fund Pantera Capital predicted that BTC will reach $20,000 again by the end of this year, as the $6,500 mark was a probable bottom.