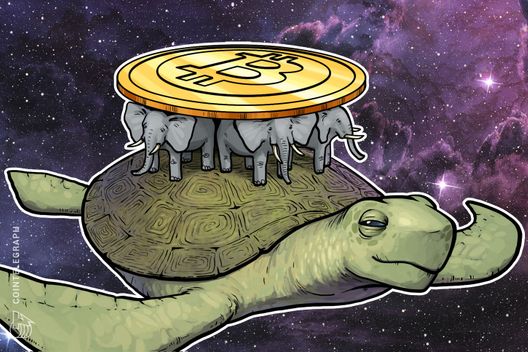 Bitcoin’s volatility is now at its lowest level in more than a year, signalling a likely bottom, futures broker Bill Baruch said in an analysis for CNBC Monday, June 18.

The Blue Line Futures president noted that after the leading cryptocurrency lost as much as 70 percent in value since its peak in December 2017, Bitcoin’s (BTC) decreased volatility is a signal that “selling has become exhausted”:

“A bottom is a process not a price. Now that [Bitcoin’s] price and volatility are back down to earth, this bottoming process can begin.”

Baruch attributed Bitcoin’s soaring value in December to the launch of Bitcoin futures contracts on CME and CBOE, with “tremendous speculation and the fear of missing out” causing prices in the cryptocurrency sector to “sky-rocket too quickly.”

The subsequent sell-out has now “wiped out most, if not all, of the over-enthusiasm,” he suggested, saying that in the near-term, a bottom would occur “more quickly and more constructively” if Bitcoin’s recent low of $6,000 holds. Baruch qualified his analysis, however, by noting that Bitcoin’s 100 week moving average is now down to $4,550.

The broker considered that Bitcoin’s 6-month downtrend will remain intact until a close above $11,300, with a near-term downtrend holding if the currency closes above $8,500.

In the long-term, Baruch maintained “significant upside,” and singled out $10,000 as is a “crucial line in the sand,” going so far as to advise selling against it.

This month has seen a series of controversial discussions surrounding the impact of Bitcoin futures markets on the leading cryptocurrency’s fortunes, with Fundstrat’s Tom Lee attributing Bitcoin’s “significant volatility” to the timing of CBOE futures contract expirations.

A much-discussed research paper released June 13 by academics at the University of Texas alleged that US dollar-backed cryptocurrency Tether (USDT) was being used as a shorting mechanism by institutional actors “to provide price support and manipulate...prices,” artificially deflating the price of Bitcoin to maximize short-term returns on futures contracts.

Yet further reports have this month revealed  that the U.S. Commodity Futures Trading Commission (CFTC) has been probing major U.S. crypto exchanges as part of its own investigation into whether price manipulation might be compromising Bitcoin futures markets.