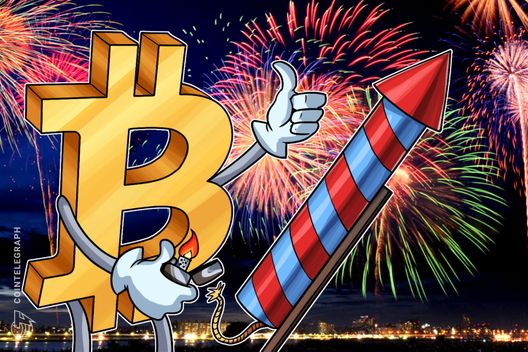 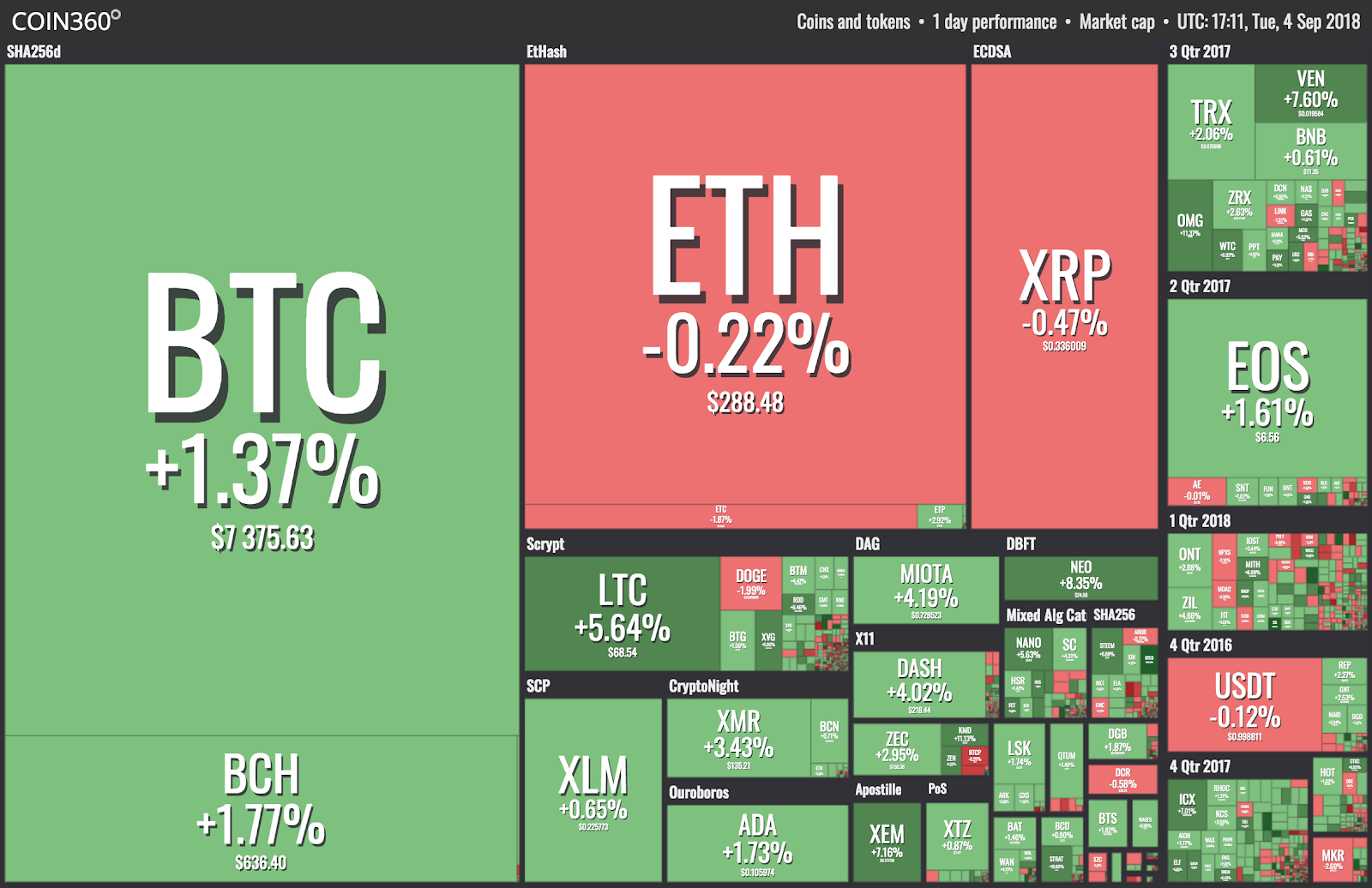 Bitcoin (BTC) is trading at around $7,374 at press time, up over 1 percent on the day as it continues boost its newly won gains, according to Cointelegraph’s Bitcoin Price Index.

Having reclaimed the $7,000 price point August 31, Bitcoin has seen a solid upwards trend and is now pushing $7,400. The top coin is trading an impressive $550 higher than its low on its weekly chart, with its 7-day rolling gains at almost 7 percent. On the month, Bitcoin is up a fraction of a percent. 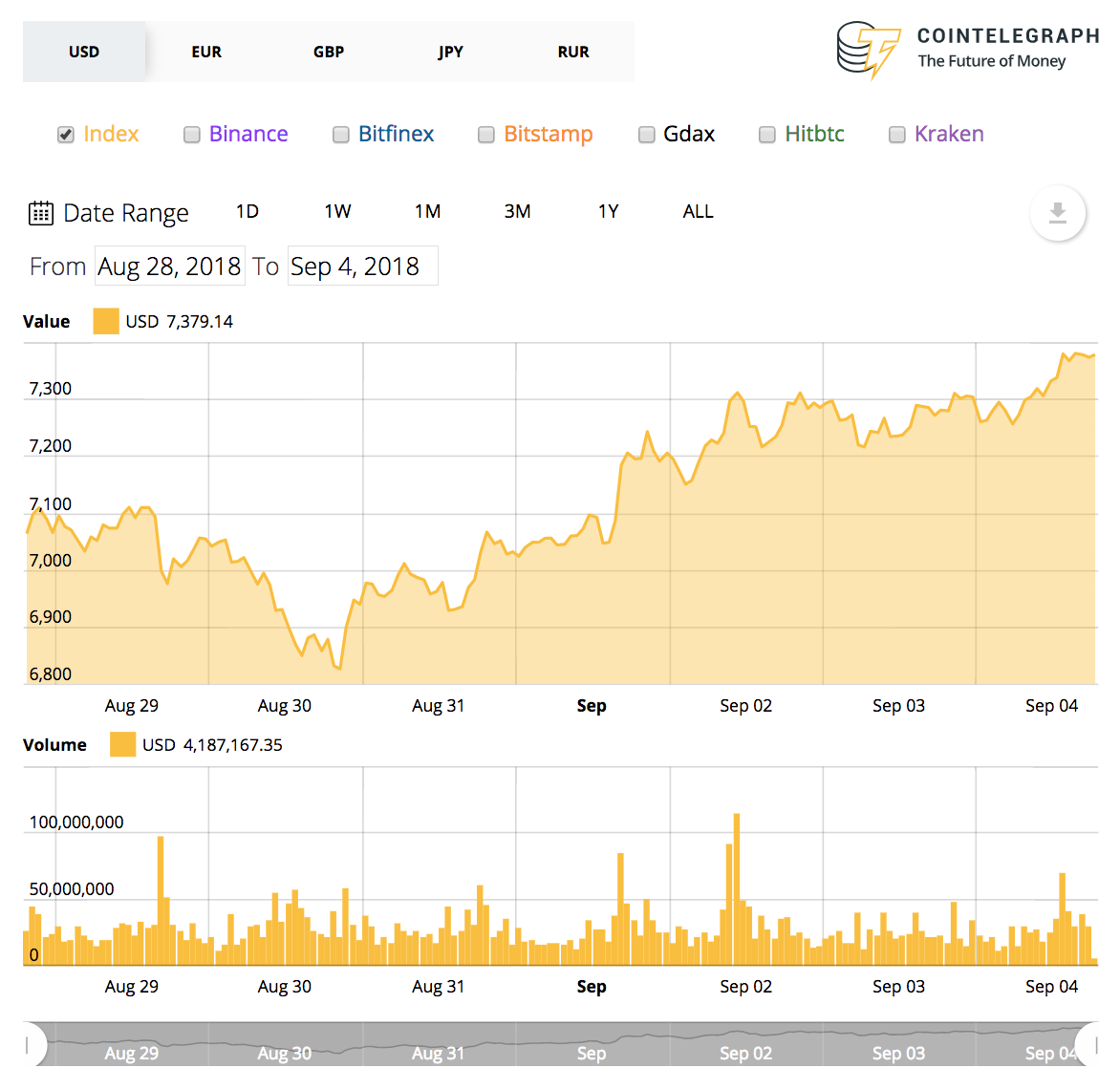 Ethereum (ETH) is trading around $288 at press time, seeing seeing virtually no value percentage change on the day. Following upon an intra-week high of about $298, Ethereum has failed to sustain upwards momentum, remaining range bound around $290.

On its weekly chart, Ethereum is more or less even at a fractional 0.1 percent gain, with monthly losses remaining around 31 percent. 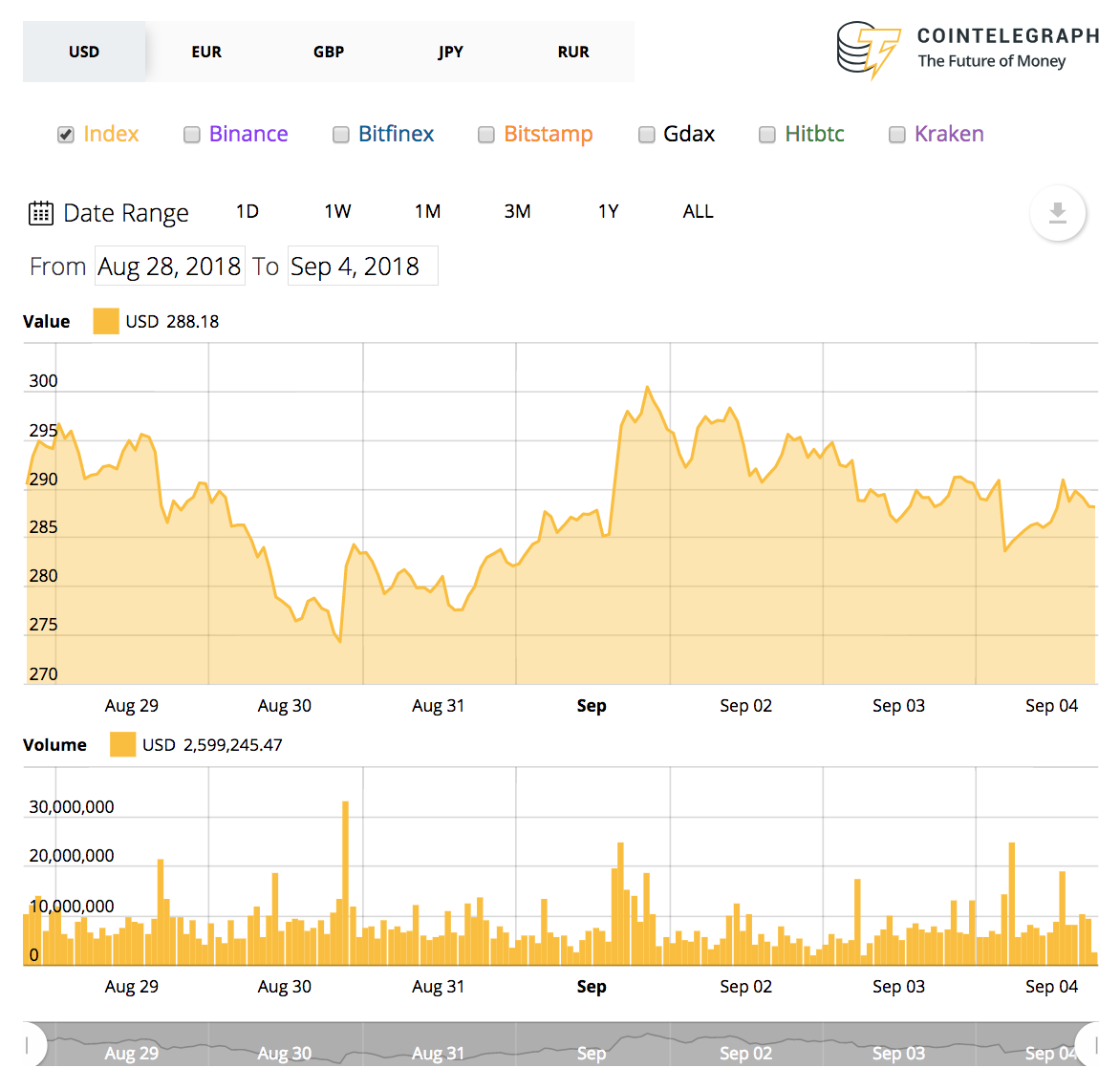 The top ten coins listed on CoinMarketCap are mostly seeing modest gains of within a 1-2 percent range. A notable exception is Litecoin (LTC), up around 5.7 percent on the day to trade around $69. Litecoin saw a strong push upwards at the start of September, followed by a couple of days trading sideways before today’s second flush of strong green. 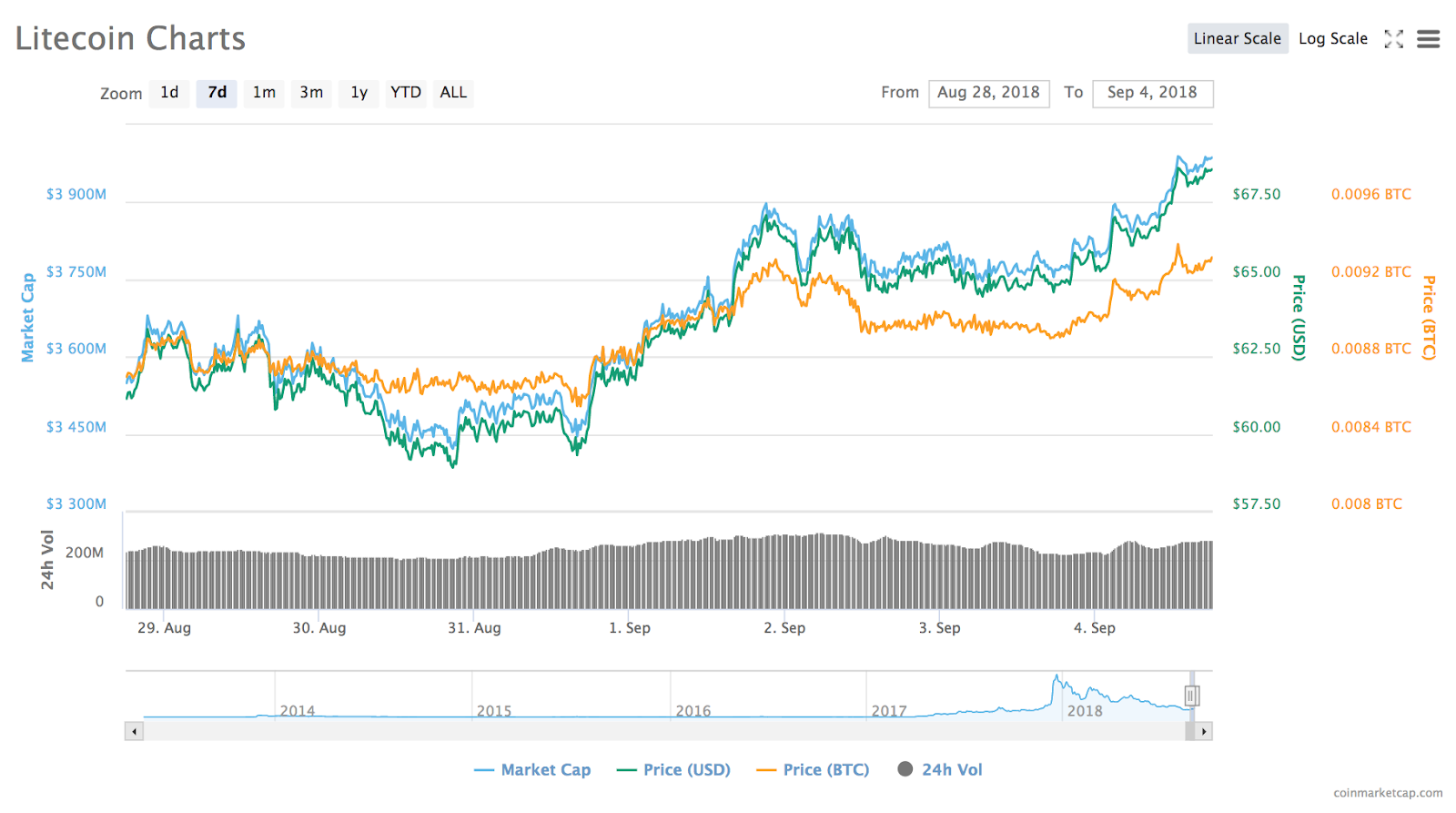 Another strong top ten performer is Monero (XMR), up almost 5 percent to trade around $139 at press time. Monero is now trading at around $40 above its value of $97 on August 30.

Stellar (XLM) has seemingly not yet absorbed any positive momentum from news that IBM has brought its Blockchain World Wire (BWW) payment network out of beta this week, aiming to ultimately facilitate international settlements between banks in “near real-time.” The asset is up around 2.8 percent on the day to trade around $0.23, a slight push upwards after a couple of days of lackluster momentum. 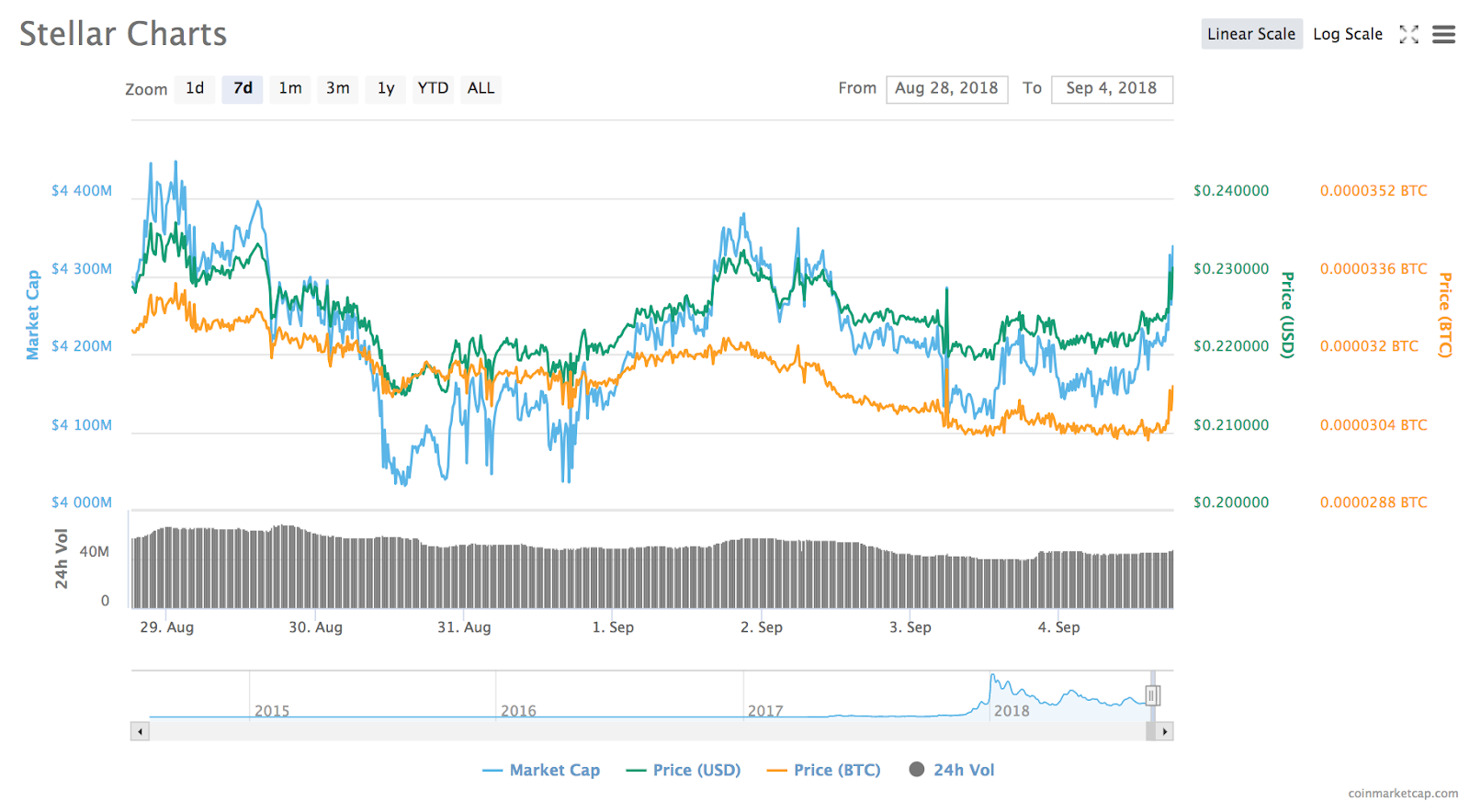 Among the top twenty coins, gains are stronger on average: NEM (XEM) and Vechain (VET) are both up almost 8 percent on the day, with IOTA (MIOTA), Zcash (ZEC) and Dash seeing 3-4 percent growth on their 24-hour charts. NEO has today soared 8.8 percent and is trading at $25 at press time, capping a week of strong, if jagged, growth.

Total market capitalization of all cryptocurrencies is around $240 billion at press time, up almost $12 billion on its weekly chart.

Today has seen bullish news for the blockchain space, with South Korea’s Internet and Security Agency (KISA) — a sub-organization of the country’s Ministry of Science and ICT — announcing plans to more than double its budget for public blockchain pilot projects this coming year.

Germany’s joint stock company Deutsche Boerse has also announced the formation of a dedicated unit for blockchain and crypto assets, aiming to harness the technology’s potential to disrupt the capital markets infrastructure.

And in China, the country’s central bank, the People's Bank of China (PBoC), has officially launched the testing phase of a major blockchain trade finance platform ahead of schedule.