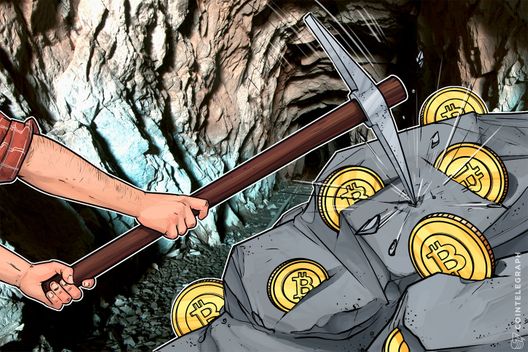 Bitcoin’s network hashrate shows growth almost every day, proving that BTC mining is still popular even with the market fall since the new year.

The Bitcoin (BTC) network’s hashrate is continuing to climb today, May 2, according to data from BitInfoCharts. The continuous growth of the hashrate over the past months signals a constantly increasing level of interest from the miners, in spite of Bitcoin’s inability to break the $10,000 price point after the market crash in February.

After BTC’s price reached $20,000 in December of last year, the market began to fall in the wake of the new year, with BTC dipping below $6,000 in February. Although the market has recovered slightly, with Bitcoin currently trading for around $9,144 and up 3 percent over a 24 hour period, the price is still more than 50 percent below its all-time high reached in December.

The rising hashrate – last recorded on May 1 as 31,590 PH/sec – means that new miners are continuously starting to mine for Bitcoin in spite of market fluctuations. This causes a constantly increasing competition between the miners and the resulting improvement of the network’s overall security.

In mid-March, Fundstrat’s Tom Lee reported that Bitcoin mining would become less profitable – and therefore less popular – during times of market decline, a prediction belied by the current high hashrate even with a stagnating market.

Bitcoin Cash (BCH), on the other hand, is currently experiencing a stagnating hashrate. BCH is a fork of the Bitcoin blockchain advertised as a faster and cheaper alternative, as the currency has a larger block size. However, in February BTC’s transaction fees were actually lower at one point than those of BCH.

Founder and CEO of ShapeShift.io Erik T. Voorhees tweeted last last month about BTC having the highest accumulated proof of work, a characteristic that depends directly on the network hashrate, as compared to BCH:

Roger – please stop referencing me to back up your opinion that Bitcoin Cash is Bitcoin. It isn't. Bitcoin is the chain originating from the genesis block with the highest accumulated proof of work. The Bitcoin Cash fork failed to gain majority, thus it is not Bitcoin.

Last August, the Bitcoin network hashrate fell by 50 percent, from 8,000 to 4,000 petahash per second in a four day period, a drop attributed to the attraction of higher block rewards for BCH mining.