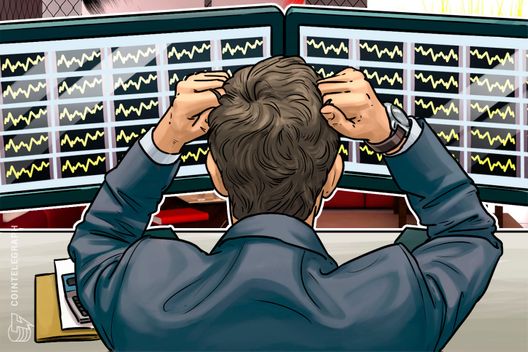 Having led the week’s impressive uptick, Bitcoin is holding its newly won gains while other major crypto assets are seeing mixed fortunes.

July 25: Bitcoin (BTC) is holding its newly won gains, having led the week’s impressive uptick to stay above $8,000. Other leading cryptocurrencies are seeing mixed fortunes, according to data from Coin360. 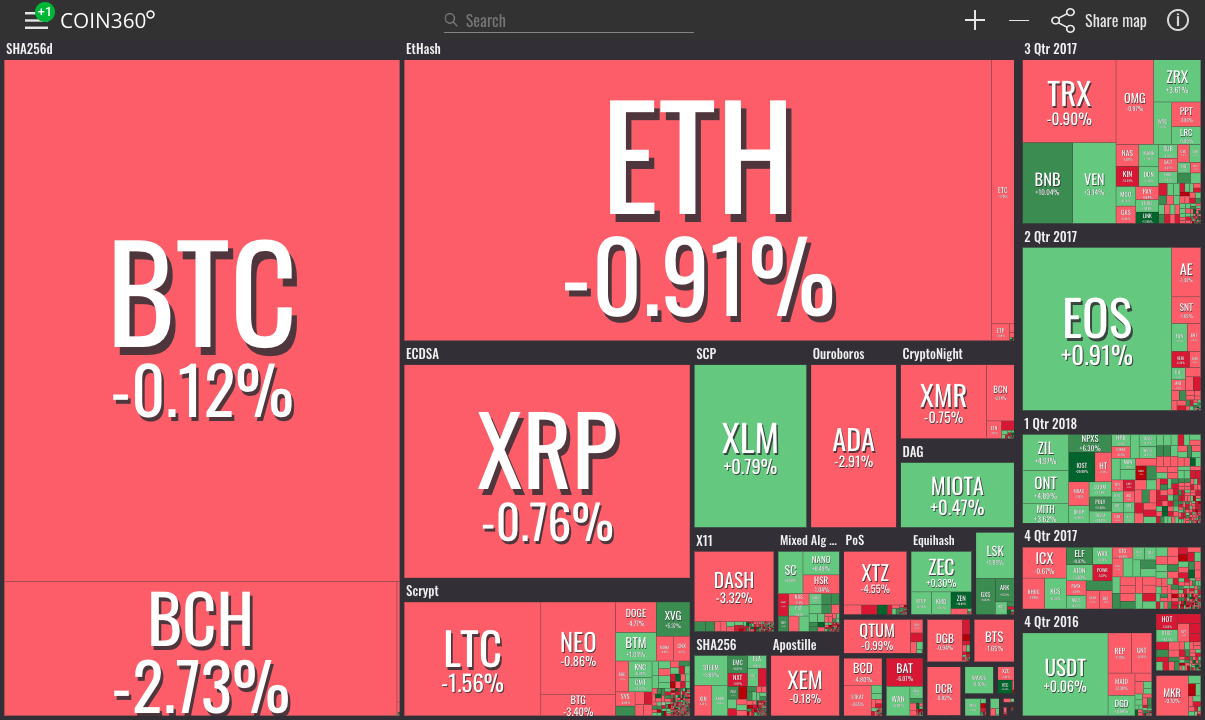 Bitcoin (BTC) is trading around $8,200 to press time, down about half a percent on the day. The leading asset surged as high as $8,483 during early trading hours — a price point it has not seen since mid-May — subsequently retracing to its current level.

Bitcoin’s weekly and monthly gains are at a bullish 10 and 34 percent respectively, according to data from Cointelegraph’s price index. 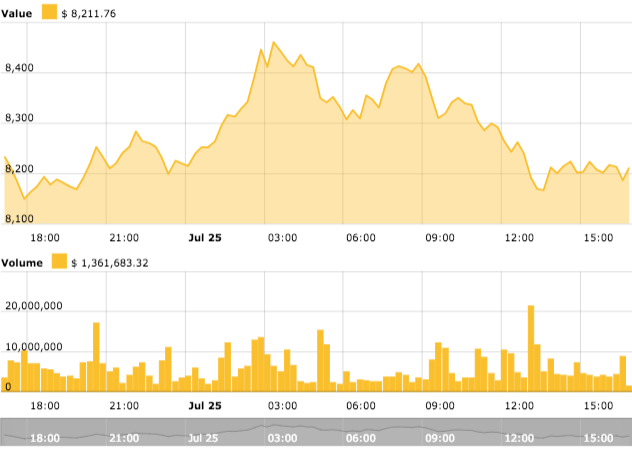 BTC dominance by market capitalization continues to inch upwards, now at 47.2 percent according to CoinMarketCap, after posting its 2018 record-high earlier this week.

Reddit co-founder Alexis Ohanian — whose VC firm Initialized Capital was one of U.S. crypto exchange Coinbase’s first investors —  said in a fresh interview that the “battle-tested” coin is “certainly the most robust” noting that “as volatile as it’s been...[Bitcoin] continu[es] to go up over the long term.”

Ethereum (ETH) is trading around $471 at press time, seeing around a 1 percent loss on the day. The top altcoin has seen considerable price movement between its morning peak at $484 and subsequent dip to as low as $464. Ethereum has now lost 4.84 percent on the week, but remains almost 1 percent up on the month. 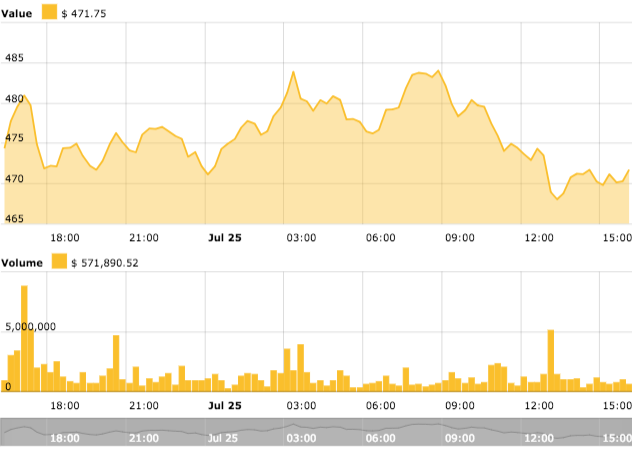 On CoinMarketCap’s listings, the top 10 coins by market cap are a mixed bag, with negative fluctuations capped at under 3 percent, and the heftiest gain pushing 1 percent growth over the 24-hour period.

Bitcoin Cash (BCH) is down about 2.5 percent and is trading at $838 to press time, after an intra-day tumble to around $833, according to CoinMarketCap. 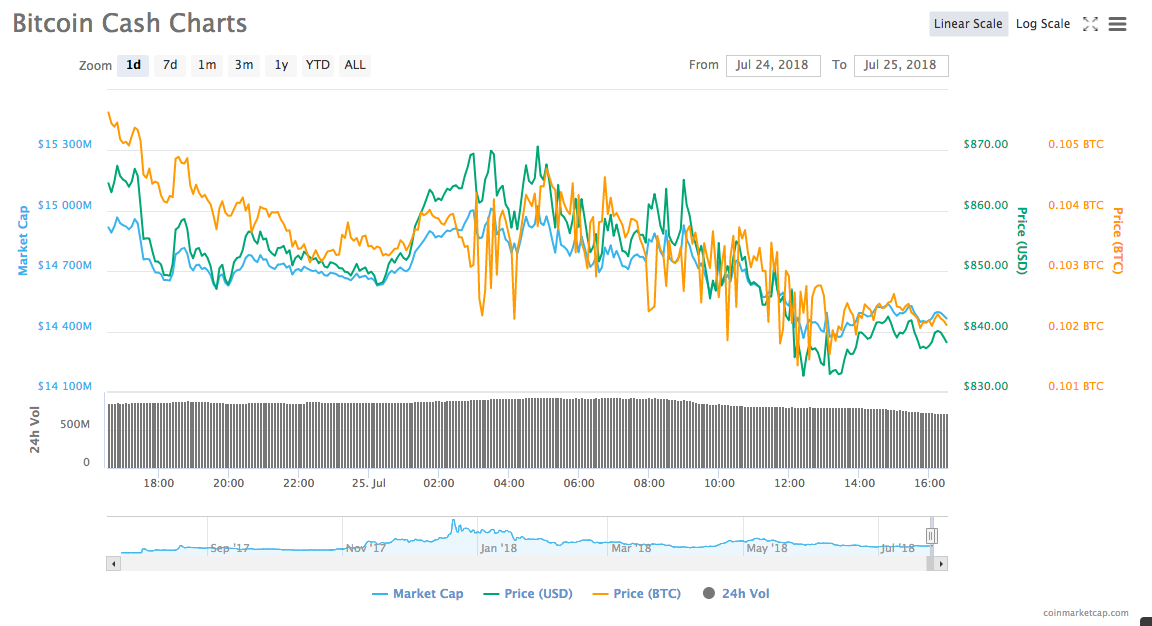 Meanwhile, EOS has been the strongest top 10 performer, seeing a solid 1 percent growth and trading around $8.48 to press time.

Of the top 20 coins on CoinMarketCap, crypto exchange Binance’s native token Binance Coin (BNB) — ranked 18th — has skyrocketed almost 10 percent on the day, trading around $13.13 to press time. The token is nonetheless just short of its weekly high at $13.72.

Tezos (XTZ) has been hit with steep losses of almost 5 percent, trading at around $2.13 to press time, following news that “Big Four” auditor PricewaterhouseCoopers (PwC) will conduct an external audit of its finances and operations.

While the Foundation has heralded the news as a watershed moment — it is “the first” large-scale blockchain organization to be monitored by PwC — the news has perhaps nonetheless drawn fresh attention to controversies that have beset the project since last year.

Total market capitalization of all cryptocurrencies is around $297 billion at press time, after surging to around $304 billion during early trading hours. 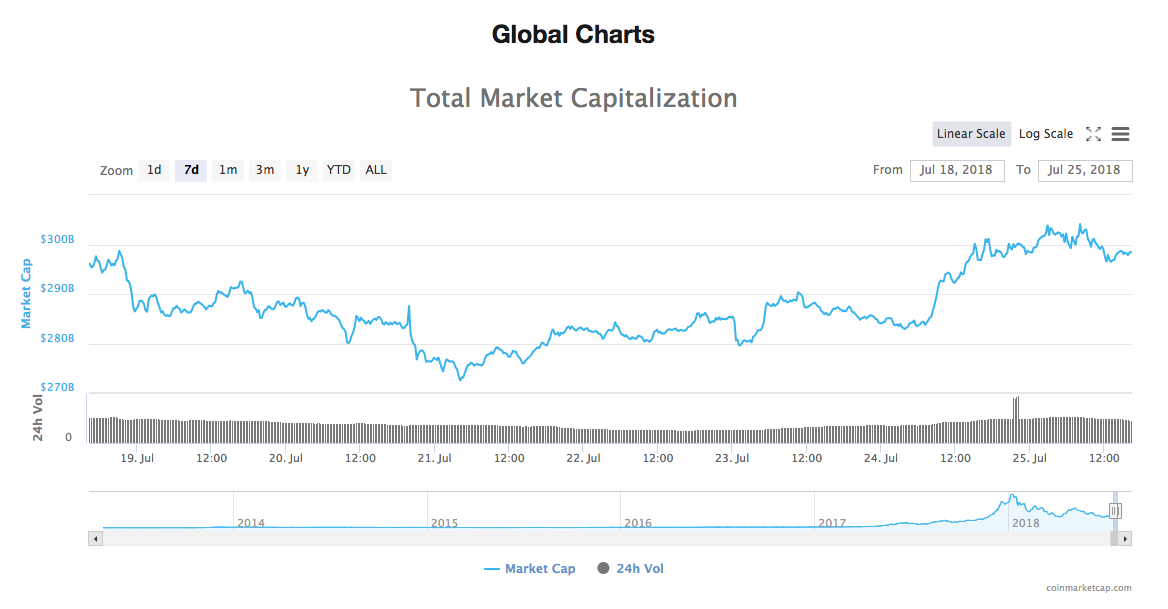 Total market capitalization of all cryptocurrencies from CoinMarketCap

EToro senior analyst Mati Greenspan today ventured that Bitcoin’s bull run this week has been led by a spike in trading volumes on the Japanese and Korean crypto markets, also noting that average BTC transaction rates have inched past 2.5 per second for the first time since February this year. 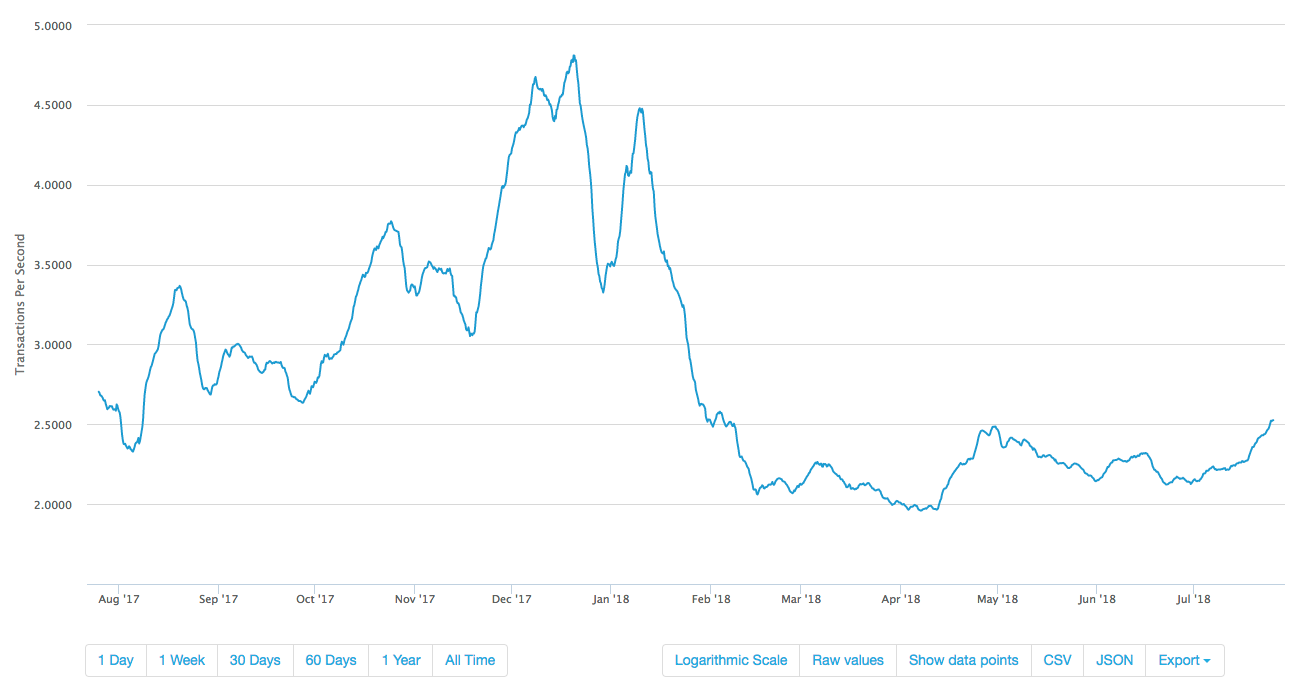 As a mark of the nascent industry’s rising status, Fortune this week released a crypto-focused version of its prestigious “40 under 40” honor roll for the first time, dedicated exclusively to innovators at the helm of the “financial revolution” ushered in by cryptocurrencies and blockchain.