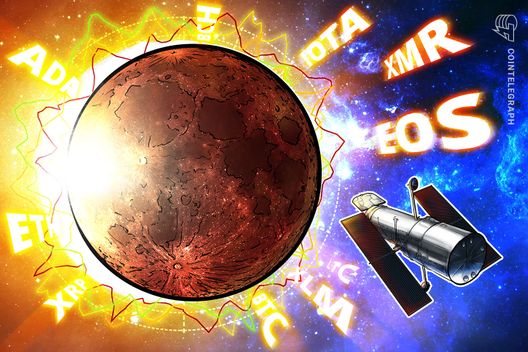 The market has lost $12 billion in mere hours, following news of Goldman Sachs halting its plans for a crypto trading desk.

Cryptocurrency prices are plunging across the board. As of press time, all of the top 10 coins are in the red. Barring Stellar and Bitcoin, each one is down by more than 7 percent. When an asset class enters a protracted bear phase, such falls are to be expected because the sentiment is brittle and any adverse news can cause panic among the traders.

The previous attempt to rally in July was abandoned after the U.S. Securities and Exchange Commission (SEC) rejected the Bitcoin exchange-traded fund (ETF) proposal submitted by the Winklevoss twins.

Today’s fall gained momentum following reports that Goldman Sachs has halted its plans to open a cryptocurrency trading desk, citing uncertain regulations. The bank, however, still wants to go ahead with its cryptocurrency custody product for institutional clients.

Many had been banking on large institutional players to provide support for crypto prices, but it looks like there will be a delay in their entry until the regulatory environment improves.

The bulls could compensate for this news and arrest the fall, which would be a positive sign confirming demand at lower levels. However, in a more negative turn of events, the price could continue to fall and make a new low. The picture will clear up over the next couple of days.

Meanwhile, let’s look at the price charts and assess the damage caused by this sudden fall.

We had mentioned in our previous analysis that Bitcoin might face resistance closer to the $7504.68 level. Therefore, we had recommended traders protect their long positions by raising their stops to breakeven. The magnitude of the fall, however, has surprised everyone.

The price plunged to a low of $6910.91 today, where some buying emerged but the bulls are finding it difficult to push the prices much higher. If the price sustains below the 20-day EMA, it will indicate weakness. The pair is currently at a critical level. The price action over the next couple of days will give us a better idea of what to expect.

The BTC/USD pair will gain strength if the bulls defend the 20-day EMA and push the prices above $7413.46.

The symmetrical triangle in Ethereum has resolved on the downside, resuming the downtrend. The pattern target of the breakdown is $192.93.

Currently, the bulls are trying to defend the August 14 low of $249.93 but the formation looks negative.

The 50-day SMA is trending down and the 20-day EMA has also turned down, which shows that the sellers are back in the driver’s seat.

The ETH/USD pair will gain strength only after it breaks out of the downtrend line and the 50-day SMA. Until then, all rallies will be sold into. Therefore, traders should avoid bottom fishing at the current levels.

Ripple has broken down of the range, which is a bearish sign. The price can now retest the August 14 low of $0.24508, which is a major support.

The 20-day EMA, which had flattened out earlier, has turned down once again and the 50-day SMA continues to trend down. This shows that the sellers are back in command in the short-term.

The trend will remain firmly down until the XRP/USD pair breaks out of the 50-day SMA and the downtrend line. Traders should remain on the sidelines and consider initiating long positions only on a breakout and close (UTC time frame) above $0.37390.

Bitcoin Cash has turned down sharply from the 50-day SMA. The 20-day EMA has failed to provide support on the downside.

The first sign of strength will be a breakout and close (UTC time frame) above the 50-day SMA. Until then, traders should avoid initiating any long positions at the lower levels.

EOS plunged back to the support level of $5.65, after failing to sustain above the 50-day SMA. If the support breaks, the virtual currency can fall to the trendline and below that to the support zone of $4.5–$4.8.

Traders who had initiated long positions on our buy recommendation can book a loss on 50 percent of the position at the current levels and keep the stop loss on the rest at $4. We shall watch the price action for the next two days and then decide whether to hold the position or close it.

Stellar has held above $0.184 since mid-December. Three previous attempts to break down of this support failed. On the previous two occasions, the cryptocurrency spent about 20-25 days in consolidation, before starting an up move.

The current consolidation has been going for a month. If the bulls break out of the overhead resistance, a move to $0.3157505, followed by a rally to $0.35 is probable.

Therefore, the traders should initiate long positions only on a breakout of the current consolidation.

Litecoin has consistently made new year-to-date lows since breaking down of the $107.102 level. The bulls had formed a range after falling to $74, but they could not break out of the 50-day SMA. Subsequently, the pair broke down and made a new intraday low of $49.466.

Currently, the LTC/USD pair has again turned down from the 50-day SMA and the downtrend line. The bulls are trying to defend the $62.319 levels. If this level breaks, the virtual currency can retest the lows of $49.466.

If the support holds, the cryptocurrency will again try to break out of the 50-day SMA. That will be the first sign that the selling has subsided. We shall wait for a reliable buy setup to form before suggesting any trades on it.

The traders who had initiated long positions following our earlier recommendation can book profits on partial positions at the current levels and keep the rest with the stop loss at $0.46. Our target objective on the upside is a move to $1.24.

Monero has turned down from the overhead resistance at $150. It has a strong support at the moving averages and at $109.220. If this support breaks, the virtual currency can slide down to $81.

If the bulls successfully defend the $109.22 line, the XMR/USD pair might again attempt to break out of the overhead resistance at $150. The trend will change if the bulls can sustain above $150 for three days.

Traders who are long on our recommendation can hold their positions with the stop loss at $90.