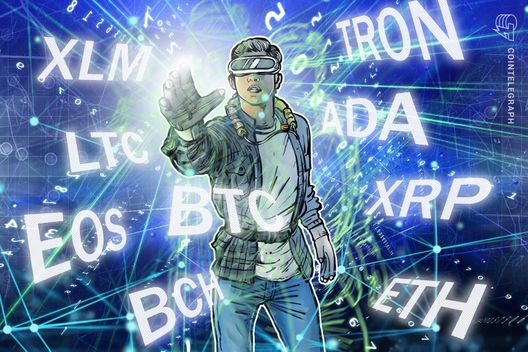 Latest technical analysis on top 9 cryptocurrencies from an expert trader.

At the press time, top nine digital currencies are in the red, with the market capitalization down to less than $330 billion, compared to $390 billion just a couple of days back.

Consolidations are usually volatile and can lead to unexplained rallies and declines. There seems to be no specific reason that has led to this fall; and overall, the fundamental news is positive and encouraging.

Argentinian Banco Masventas (BMV), has tied up with Bitex to facilitate the use of Bitcoin for international payments. It is expected to reduce transfer time by a day. A similar pilot project by Ripple using xRapid platform had announced payment time of just 2 minutes and transaction savings of 40-70 percent.

Various sectors are exploring ways to implement the blockchain technology to improve productivity and accountability. Similarly, the governments are also looking at ways to implement blockchain, whereas, many central banks are toying with the idea of their own cryptocurrency.

With so much happening, the dips should be seen as a buying opportunity, but the traders should wait for the decline to end before taking long positions.

We had recommended buying Bitcoin closer to the support of $7,941.68 if it held, but today it slumped below $7,700, which shows strong selling pressure. There are two possibilities at this level.

One is that the bulls will pull back above $7,900 level after a quick break, catching the bears off-guard. Another possibility is that prices breakdown of $7,900 and slide to $7,000. It is difficult to predict which one of the two scenarios will play out.

So, how to trade it?

The best approach is to wait and watch for a couple of days. If the BTC/USD pair breaks down of the support and sustains below $7,900, you shouldn’t buy.

If prices slide below $7,900 momentarily but recover and sustain above $8,000 levels, traders can buy about 50 percent of their usual position size and keep a close stop loss, preferably below the recent lows. Remaining 50 percent position can be added once the digital currency scales above both the moving averages.

The target objective is a move back to $10,000 levels. This is a risky trade but can be taken due to the attractive risk to reward ratio.

The ETH/USD pair will become positive only above the $745 levels. We suggest waiting for the decline to end before attempting a buy.

It is not advisable to catch a falling knife.

Ripple is fast approaching the bottom of the large range. Though this support of $0.56270 had broken down in end-March of this year, it did not find sellers at lower levels, and prices again climbed back into the range on April 12.

We believe that the bulls will again attempt to defend the $0.56 levels. If the lows hold, traders can expect the XRP/USD pair to rally to $0.93 and then to $1.22 levels in the medium term.

We suggest waiting for a few days to confirm that the decline has ended before buying because a fall below $0.56 can extend the decline to $0.45, below which the digital currency can plunge to $0.24.

Bitcoin Cash broke below the neckline of the head and shoulders pattern on May 16, and the retest of the breakdown levels held on May 20 and May 21.

The BCH/USD pair subsequently broke below the 50-day SMA on May 22. It should now collapse to $650 levels with minor support at $750.

The $558.3870 level has not been broken since November of last year. Hence, traders can buy once the digital currency stabilizes near the key support levels.

If both these levels break, the EOS/USD pair can decline to the bottom trendline of the channel at $8.

With prices breaking down of both the moving averages and the 61.8 percent Fibonacci retracement levels of the latest rally, the virtual currency has become negative.

We shall change our view once price breaks out of the descending channel and sustains above it.

We anticipate strong support in the zone between $107-$115 because if the low of $107 breaks, it will complete a bearish descending triangle pattern that will be very negative for the LTC/USD pair.

If the support zone holds, we should see another attempt to break out of the downtrend line of the triangle. We suggest waiting until the digital currency takes support at levels mentioned above before initiating any long positions.

Cardano has broken below the $0.23 levels, which had been acting as strong support for the past few days. It can now sink to the lows of $0.13 with minor support at $0.19.

Repeated attempts to break below the $0.13 level in March and April of this year failed. Hence, we consider this to act as strong support again this time.

However, we suggest waiting for a few days before establishing long positions because if the ADA/USD pair breaks down of $0.13, it can sink to $0.08, a level last seen in December 2017.

Stellar has broken below the neckline of the head and shoulders pattern, which is a bearish sign. Though the pattern targets are much lower, it should now decline to the strong support level of $0.184. This level had held for about a month from mid-March to mid-April of this year, hence, we can again expect some buying to emerge at $0.184.

If the bulls succeed in defending the support, the XLM/USD pair will also confirm the formation of a range, which can be traded by buying on a rebound from the lows and selling close to the overhead resistance of the range.

Traders can wait for the prices to stabilize and turn up before buying.

TRX has been falling for the past two days and has broken below the 20-day EMA. It is currently trying to taking support at the trendline. If this breaks, it can fall to the 50-day SMA.

Traders should wait for a day or two to confirm that the levels are holding and then buy on a rebound from $0.059. If the digital currency sinks below $0.056, long positions should be avoided because it opens the door for a further fall to $0.04 levels.

The digital currency is the strongest among the top ones we cover because it is the only one still trading close to its 20-day EMA and well above its 50-day SMA. So, we shall look to buy it as soon as we find a bullish pattern on it.