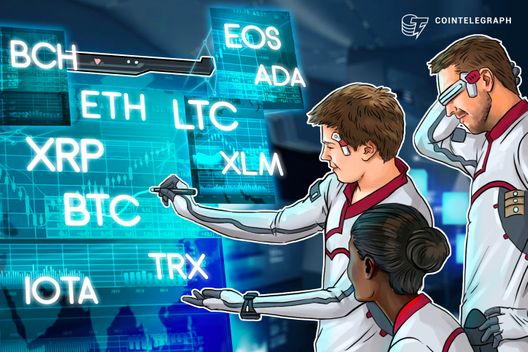 Some altcoins are falling even as Bitcoin is experiencing a rally - what is the reason for the increasing BTC dominance?

Why are the altcoins falling even as Bitcoin is finally on the rise? After an extended decline, the bottom fishers usually become the leaders. This is the first indication that a change in trend is around the corner.

For the past few months, Bitcoin’s dominance has been gradually climbing from just under 36 percent in early May to the current value of over 46 percent. This shows that while investors are staying away from the altcoins, they have been accumulating Bitcoin for some time.

Though Bitcoin prices have fallen sharply this year, the interest in BTC futures trading has picked up. The Chicago Mercantile Exchange (CME) reported an increase in its average daily volume of Bitcoin futures trading by about 93 percent in the second quarter over the first quarter of 2018.

If Bitcoin breaks out of the critical overhead resistances, the traders’ sentiment will be boosted, and in turn they will start buying the altcoins that show promise. When most of the top cryptocurrencies turn upwards, it will indicate the start of a new uptrend. However, this year we do not expect a vertical rally akin to the one we saw in 2017.

So, which are the virtual currencies that are preparing for a rally?

The pullback on Bitcoin stopped at the $7,250 mark on July 21, which is a positive sign. The bulls are currently attempting a breakout above the overhead resistance at $7,750.

If successful, the BTC/USD pair can rally to $8,500, where it might again face another round of selling pressure. A breakout above $7,750 would also invalidate the descending triangle pattern, which is a bullish sign. The moving averages have completed a bullish crossover and the 20-day EMA should now act as a strong support on any declines.

Considering these signs, we suggest traders hold their remaining positions initiated at $6,650 with the stops at breakeven. The stops can be trailed higher in a couple of days.

If the bulls fail to scale above the overhead resistance, we may witness a few days of range bound action between $7,250 and $7,750. Our bullish view will be invalidated if the price breaks and sustains below $6,950.

Ethereum is finding support close to $440 but is still struggling to break out above $470. The 20-day EMA has flattened out, which increases the probability of a consolidation in the near term.

The zone between the 50-day SMA and $515.28 will act as a resistance. Once above this, the ETH/USD pair can move up to $550 and thereafter to $600. The longer the consolidation, the stronger will be the breakout.

If the digital currency slips below $440, it can slide further to the critical support at $404.99. Below this, the fall can extend to $358. Therefore, we suggest keeping the stops on the existing position at $400.

The buyers are still not back in Ripple as it is struggling to bounce off the $0.42420 line. It is facing resistance at the 20-day EMA.

The XRP/USD pair is currently consolidating in a broad range of $0.42420 - $0.51978. A breakdown of the support can sink it to $0.33. The only minor positive is that the RSI has been forming a positive divergence.

The bulls have successfully defended the 20-day EMA on Bitcoin Cash for the past three days, which is a positive sign.

Therefore, we suggest holding the existing long positions with the stops below $650. We shall trail the stops higher at the first available opportunity.

The EOS/USD pair will begin moving upwards after it breaks out of the overhead resistance at $9.4456. The pattern target of such a breakout is $12.

Litecoin is currently range bound between $74.074 and $91.146. The 20-day EMA has turned flat, which points to a continuation of the consolidation.

We like the strong positive divergence on the RSI. If the bulls succeed in breaking out of $91.146, the LTC/USD pair can rally to the overhead resistance at $107. The downtrend line is also at this level.

Once the bulls scale this, the digital currency is likely to start a new uptrend. Therefore, we shall wait for the price to sustain above $108 before proposing any trades on it.

On the downside, if the bears break below $74.074, the virtual currency will become negative and can fall to $57.

Cardano bounced off the 20-day EMA on July 21, however, the bulls are unable to break out of the overhead resistance at $0.18617.

The moving averages are on the verge of a bullish crossover, which is a positive sign. If the bulls break out and close above $0.181617, a rally to $0.23 will be on the cards.

The ADA/USD pair will turn negative if it closes below the 20-day EMA. We suggest traders hold on to their long position with the recommended stop losses. We shall trail the stops higher in a day or two.

Stellar successfully retested the breakout level of $0.2544 on July 21, which shows that the bulls continue buying the dips.

However, the XLM/USD pair has failed to break out of the overhead resistance at $0.31312212 for the past two days. This shows profit booking at higher levels.

The virtual currency might remain in the range of $0.25 - $0.313 for the next few days. A break out of this range can carry the coin higher towards $0.386, while a breakdown can sink it back to the lows.

The probability of a breakout will remain high, as long as the price remains above the 20-day EMA. Therefore, we suggest investors hold on to their long positions. We shall trail the stops higher in a couple of days.

The moving averages have completed a bullish crossover, which is a positive sign.

IOTA has been trading in a tight range for the past two days, close to the critical support at $0.9150.

The IOTA/USD pair has formed a small bearish descending triangle pattern that will complete on a breakdown of $0.9150. This will give a pattern target of $0.5721. Therefore, we suggest to stop losses on the existing long position if the digital currency sustains below $0.8850.

On the upside, a break out of the downtrend line of the descending triangle will be the first sign that the worst is over. Until then, all pullbacks will be sold into.

Though TRON has not broken below $0.03275, it has failed to attract buyers at these levels. If the bulls don’t rise above the 20-day EMA within the next two days, the chances of a breakdown increase.

The TRX/USD pair can slide to $0.022806 if it sinks below the current support levels. On the upside, the bulls will face resistance at the 20-day EMA and the 50-day SMA, both of which are sloping down.

We like the developing positive divergence on the RSI but we shall recommend a buy only if we see the price move up. Until then, we suggest traders remain on the sidelines.