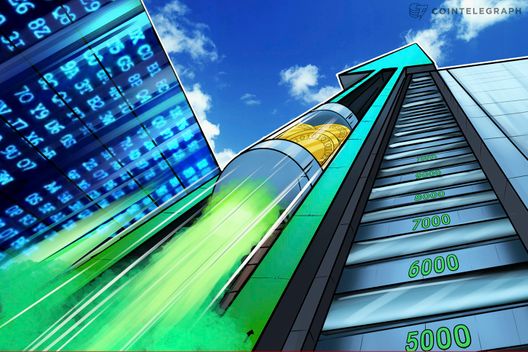 Bitcoin’s value increased by more than $1,000 in half an hour Thursday, Apr 12. Let’s look at the charts to see what comes next.

On April 12, Bitcoin saw the biggest one-hour trade volume in its history, as price rallied by more than $1,000 in a period of thirty minutes. This spike in price was not preceded by any news, which points to a possible whale buying back bitcoins that they sold at higher levels or an entry of a large institutional player.

Another possible reason is that the selling pressure has eased, as most of the tax day selloffs are behind us.

While it is difficult to pinpoint the exact reason for the increase, the move boosted sentiment across the major altcoins. As a result, the market capitalization of all cryptocurrencies again rose above the $300 billion mark, after dipping below $250 billion on April 01.

Let’s see if we can find any buy setups on the charts.

In our previous analysis, we had suggested long positions on Bitcoin once it closed above the 20-day EMA. The condition was met yesterday, as prices zoomed past the overhead resistances. So, has the cryptocurrency finally bottomed out?

The previous attempt to break out of the channel on March 03 had failed within three days. This time, things look positive because the BTC/USD pair has broken out of the descending channel with force. It should now quickly move to the 50-day SMA, which might offer some resistance.

Traders who have initiated long positions yesterday can hold with a stop loss at $6,700. They can trail their stops higher if Bitcoin struggles to break out of the 50-day SMA.

It looks like a bottom, but the price needs to sustain at the higher levels to confirm the sentiment.

Our bullish view on Ethereum was validated yesterday, as price closed above the 20-day EMA and the resistance line of the descending channel. The move should now extend to the 50-day SMA.

This is the first time that the ETH/USD pair has broken out of the resistance line of the descending channel, which is a bullish development. If the bulls succeed in breaking out of the $600 levels, the next move should be to $725 levels.

Any dip, as long as it stays above the $420 levels, can be used as a buying opportunity.

Bitcoin Cash has broken out of the overhead resistance at $778.2021 and the 20-day EMA, which sets up a quick short-term trade

Traders can initiate long positions at the current levels around $779 and keep a stop loss below the recent lows of $610. The target objective on the upside is a move to $974.

Above the 50-day SMA, the BCH/USD pair can rally to $1,115 levels. Instead of booking profits at the overhead resistance levels, traders should raise their stops higher because Bitcoin Cash is known to make large moves once it turns positive.

Ripple has already reached our first target objective of $0.7, mentioned in the previous analysis. The markets have rejected the lower levels, which is a bullish sign.

We expect the XRP/USD pair to trade in a wide range.

We have been bullish on Stellar because of the positive divergence on the RSI. Yesterday, price confirmed our positive view as it broke out of the 20-day EMA.

The XLM/USD pair is currently trading at the resistance line of the descending channel. If it breaks out of the channel, we expect the trend to change from bearish to bullish.

Traders can enter long positions on a breakout and close (UTC time frame) above the resistance line of the channel. The initial stop loss can be kept at $0.18 on a closing basis (UTC time frame).

The target objectives on the upside are a move to $0.36 and $0.47. The risk to reward ratio is not attractive, hence, traders should book partial profits at $0.36 and trail stops higher to reduce their risk.

If the overall market turn bearish, we shall close the position well before the stops are hit. Our bullish view will be invalidated if prices remain inside the channel.

Litecoin has cleared the first hurdle of the downtrend line 1 but is struggling to break out of the 20-day EMA.

Once it breaks out of the 20-day EMA, it has another horizontal resistance at $141.026. The LTC/USD pair will turn bullish once it scales above $142.

On the upside, it will again face resistance at the downtrend line 2, which is at $165. Currently, we don’t have a good risk to reward ratio on the trade, hence, we are not proposing any trade on it.

The 20-day EMA and the 50-day SMA are on the verge of a bullish crossover, which is another positive. The ADA/BTC pair can retest the breakout levels of 0.00002460, which should hold.

Traders can hold their positions and add more on a successful retest of the breakout levels.

We had suggested long positions on NEO on a breakout above $64 levels. That trade went live yesterday.

The NEO/USD pair should find strong support in the zone between the 20-day EMA and $63.62. The initial stop loss can be placed at $44.

Though the 50-day SMA is at $78, it has not acted as a major resistance previously. Hence, we believe that the virtual currency will rally to the downtrend line of the descending triangle at $88.

This is an aggressive position because the trend is still down and price is still inside the descending triangle. Hence, traders should keep the position size at only 50 percent of usual.

Our suggested buy level of $7.5 on EOS was filled yesterday. Our target objective on the upside is a move to $11. The moving averages are on the brink of a bullish crossover, which signals the start of a new trend.

Traders can book partial profits at $9.5 to reduce their risk and raise the stop loss on the remaining position to $5.5.

We anticipate a retest of the breakout level of $7.28, which should hold. However, if the  EOS/USD breaks below this support, it will become negative and we may recommend closing positions early.