April Fool’s day began with a fake story about a full audit release for Tether and has continued with an unending number of fake crypto launches.

Every year on April 1 – April Fool’s Day – members of the crypto sphere try to outdo each other with nerdier and nerdier inside jokes and pranks, and this year has not proven to be any different.

Subreddit /r/bitcoin saw a fake post in 2015 about a return of all Bitcoin (BTC) stolen from now-defunct crypto exchange Mt. Gox by a former DEA agent seeking a plea deal. In 2017, Ethereum (ETH) co-founder Vitalik Buterin wrote a prank blog post claiming that ETH would change from its Proof of Work (PoW) algorithm to the Proof of Authority (PoA) in 2018.

This year, Buterin posted another April Fool’s blog post announcing the launch of an Ethereum “stablecoin” called the World Trade Franc (WTF). The WTF, which Buterin refers to as “combin[ing] all benefits of capitalism and socialism with none of the downsides of either,” is currently being marketed to “sketchy Pacific island nations national governments." Below is a screenshot of WTF’s “people:” Jesus Coin, described on Twitter as “THE currency of God’s Son,” tweeted today in another apparent Buterin-related prank about the new addition of Ethereum’s co-founder to their management team:

I have great news Vitaly Buterin has joined us. Retweet @VitalikButerin, get another 10,000 JC and let’s pass moon and get straight to heaven! pic.twitter.com/pxygH6zatE

Coinmarketcap, a popular cryptocurrency market cap ranking resource, added a “Lambo” currency reference for its listed assets, showing how many “Lambos” each currency is roughly worth. As Bitcoin is currently trading for around $6,561, one Coinmarketcap’s “Lambo” is equal to exactly $200,000.

Reddit user drowssap5 has also gotten into the April Fool’s spirit, posting on subreddit /r/buttcoin that Tether had finally released their long-awaited full audit, with the following caveat:

“Just kidding. They wouldn't do that.

Bitrefill, a service for adding money to prepaid phones with Bitcoin, posted on both Twitter and their blog today that they are changing their name to “S**trefill,” even going as far as to change their official URL to mimic their “new name.”

“S**trefill’s” Medium blog post writes that due to a decrease in demand for spending Bitcoin, they are switching their focus over to “s**tcoins,” or coins that “are not perceived as having such a “high long-term value.” The launch of S**trefill’s new token, S**tCoinCash, will support a Lightning Network equivalent called the Crackening Network, according to the Medium post. 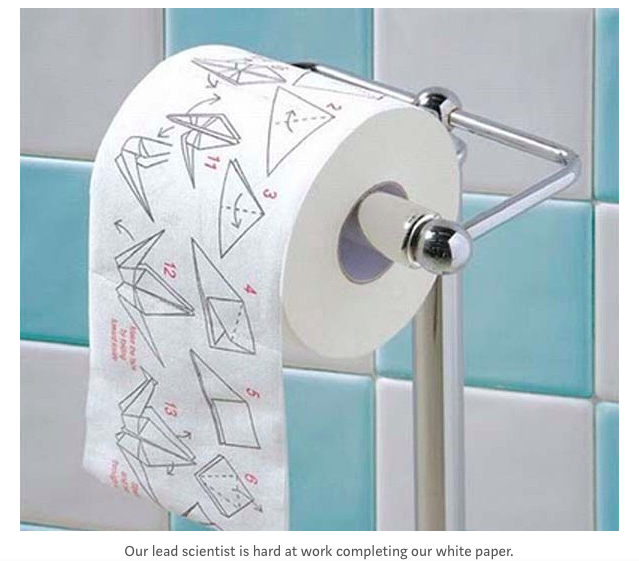 Financial news site Finance Magnates posted a legitimate looking “exclusive” on Facebook launching its own cryptocurrency with a “massive” Initial Coin Offering (ICO) that would rival both $850 mln ICOs of Telegram. The fake “Facebook Coin” would require “data such as name, address, phone number, mother’s maiden name and name of first pet,” and would advertise itself on the site, in spite of Facebook’s recent crypto-ad ban.

The real #AprilFoolsDay joke today is the #Bitcoin price.